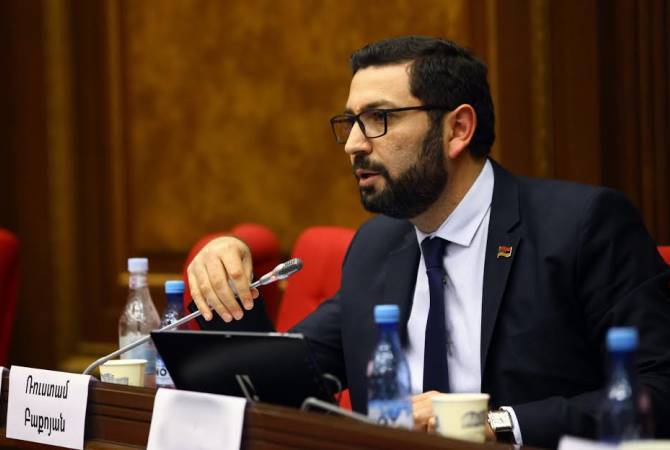 
YEREVAN, APRIL 15, ARMENPRESS. Armenian Member of Parliament from the ruling My Step bloc  Rustam Bakoyan – representing the Yazidi community of the country, has introduced a bill envisaging the opportunity of unpaid leave for national minority representatives for celebrating their national, religious and remembrance days.

Bakoyan introduced the bill on amending the Labor Code during the plenary session of parliament, and also congratulated the Yazidi community on Malake Taus, the Yazidi New Year.

“Nearly 100 years after the Armenian Genocide, the Yazidi people were subjected to genocide on their land in the beginning of the 21st century. We are living in a very contradictory period of time, unfortunately, we – the Yazidis – are still being murdered for our national affiliation and religion in the 21st century. However, in this context, me and all Yazidis living in Armenia have a big occasion to be proud of, we live in and are citizens of a country where our rights are fully protected, our life is a supreme value here,” the lawmaker said.

The amendments proposed by the MP seek to grant no more than 4 days a year in unpaid leave for national minority representatives to celebrate their holidays and commemoration days.

Gevorg Petrosyan from the opposition Prosperous Armenia Party, however, said that he himself used to work in the private sector and there was never a case when a national minority representative from the Yazidi community would be rejected leave on those days. He says the workers are allowed to be absent for these occasions and they still keep their pay.

“This bill makes it look like they will be deprived from their salaries for these days”, he said.

Bakoyan said the issue concerns not only the Yazidi community and that the issue is significant.

He said the “brotherly attitude” of Armenians is obvious, but regulation by law are still important.

Reporting and writing by Anna Grigoryan