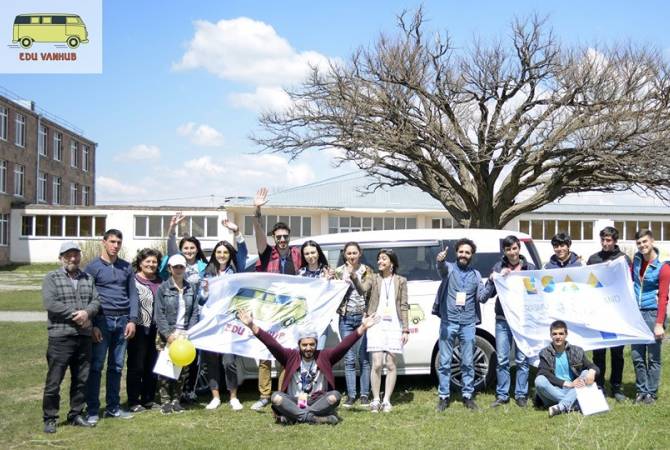 
YEREVAN, MAY 25, ARMENPRESS. Edu VanHub – a school on the wheels, traveling in Armenian provinces and educating young people on media-literacy.

The man behind the initiative is Gevorg Harutyunyan, the founder of EduVanHub.

Together with a group of volunteers, Gevorg tours rural parts of Armenia and Ukraine and teaches the young people media-skills and media-literacy.

Gevorg told ARMENPRESS he came up with the idea when he and his friends had launched a touring theater. “We would visit villages and stage performances. I was born in Yerevan, I’ve lived in several cities abroad and I couldn’t have a good understanding about problems in villages, but the touring theater helped me see that many talented young people living in villages sometimes don’t have much opportunities to get to know cultural events, media development and others,” Gevorg said.

In 2017, he even won the third place at the Erasmus Talent grant competition in Milan, and a year later he founded the GaragErasmus4Yerevan organization, and went on to win another grant for launching the mobile college.

He said the project was so successful in Armenia that they decided to go international.

“We chose Ukraine because it too is a post-Soviet country, and it has political, social-economic, educational and other issues,” he said.

Gevorg says they are now looking for sponsors to continue the project.

“I remember there were some people who were skeptical about online education, but factually life showed that it is essential”, he said, speaking about the isolation during the coronavirus pandemic.

Reporting by Angela Hambardzumyan; Editing and Translating by Stepan Kocharyan