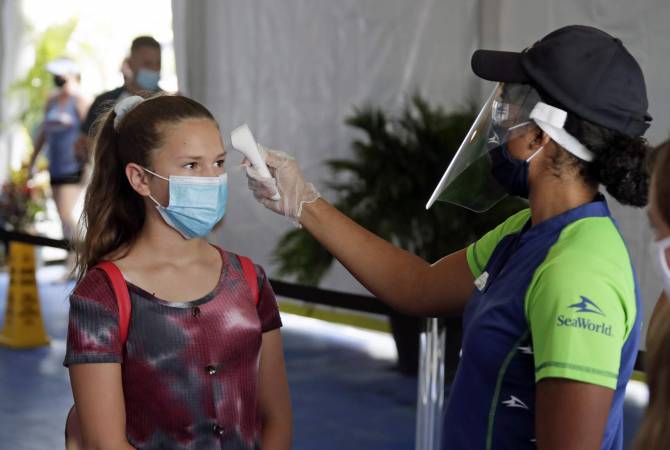 
YEREVAN, JUNE 19, ARMENPRESS. Ten states saw a record number of new Covid-19 cases this week, and one of them could be the next epicenter of the national health crisis. Florida reported 3,207 additional coronavirus cases on Thursday -- the largest single-day count in the state since the pandemic, according to the state health department. Florida's total reported cases climbed to nearly 86,000, according to data.

The Sunshine State has "all the markings of the next large epicenter of coronavirus transmission," and risks being the "worst it has ever been," according to projections from a model by scientists at Children's Hospital of Philadelphia and the University of Pennsylvania.

"That makes me very worried because, at the numbers they're now seeing, it's very easy to start doubling and lose control of the epidemic," Dr. David Rubin, director of PolicyLab at Children's Hospital of Philadelphia, told CNN on Thursday.

Rubin said model predictions are matched by actual cases in Florida and confirmed by increasing hospitalizations from Tampa to Orlando to Miami-Dade County and up the east and west coasts of the state.

"The potential for the virus to take off there is very, very nerve-racking and could have catastrophic consequences" because of the state's aging population and the prevalence of nursing homes and retirement communities, said Dr. Jeanne Marrazzo, director of the division of infectious diseases at the University of Alabama at Birmingham.

The governors of Florida and Texas are among state and national leaders who attribute the increase in cases to more testing and other factors. Epidemiologists argue case numbers should go down with greater testing, because theoretically health officials should be able to trace the cases and slow the spread of the virus.

Health experts, such as Dr. Aileen Marty, often respond that hospitalizations are a sign of a "real increase in cases."

"The reality remains that there are more hospitalizations happening here right now, so we know this is a real increase in cases," Marty, an adviser to the Miami-Dade County mayor and an infectious diseases professor at Florida International University, told CNN's Erin Burnett.

More than three quarters of Florida's adult intensive care unit beds are occupied, according to data from the Florida Agency for Health Care Administration. General hospital beds were at nearly 75% capacity across the state.