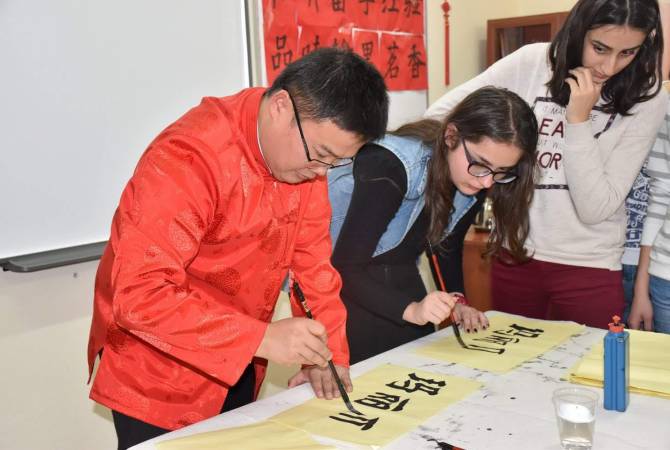 
YEREVAN, JUNE 24, ARMENPRESS. The number of people speaking in Chinese is growing in Armenia.

It’s already five years the Center of the Chinese Language and Culture of the Yerevan State University is giving a good opportunity for those who are interested in Chinese and the Chinese culture.

YSU Vice Rector Artur Israelyan gave an interview to ARMENPRESS on the occasion of the 5th anniversary of the foundation of the Center.

“From the first days of its foundation the key goal of the Center has been to direct the learning interest of students to the Chinese cultural values because Armenians and Chinese are friendly peoples, and it’s not a coincidence that the mutual interest is gradually growing. The Center aims at assisting the introduction of a Chinese learning process in the University, organizing respective courses for the YSU students”, he said.

During its 5-year activity the Center has organized and continues organizing both individual and group courses in Chinese both for the YSU and the external applicants. The YSU Vice Rector said people of different specializations, age and interests apply for study at the Center. “This shows the successful activity of the Center. In addition to regular courses, the Center is also holding thematic lectures, film-watching, exhibitions about the Chinese language, culture, religion and history”, he said.

The Center is also actively cooperating with the Embassy of China and the Confucius Institute. There is also cooperation with the best Chinese universities and educational facilities which creates exclusive opportunity for the YSU and the Center’s students, contributes to the effective implementation of the Center’s works, as well as exchange of experience.

“Thanks to our consistent work the income of the past 5 years has comprised 7 million 060 thousand AMD, including the taxes, which I think is not a bad figure”, the YSU Vice Rector said.

The website of the Center will soon be ready on the occasion of its 5th anniversary.

The Center of the Chinese Language and Culture of the Department of International Relations of YSU has been established on April 17, 2015.

Full version of the interview is available in Armenian.