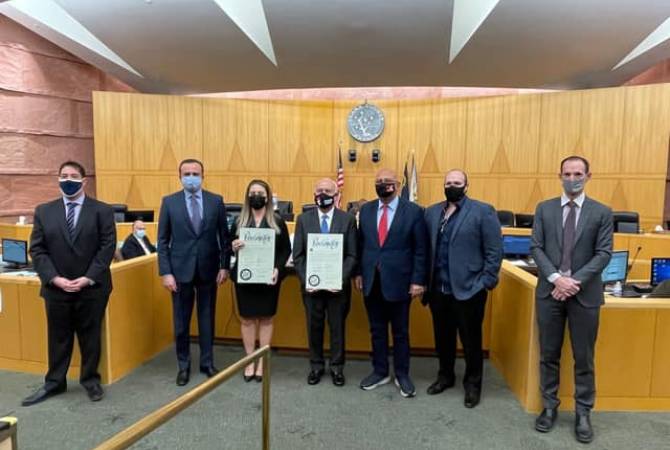 
YEREVAN, NOVEMBER 19, ARMENPRESS. On November 17, Nevada State’s Clark County Commission adopted a Proclamation recognizing the independence of the Republic of Artsakh and its right to self-determination and freedom, the Consulate General of Armenia in Los Angeles reports.

The session held at the Clark County Government building was attended by the Consul General of Armenia in Los Angeles Ambassador Armen Baibourtian and the Permanent Representative of Artsakh to the U.S. Robert Avetisyan. The authors of the proclamation were Clark County Commissioners Michael Naft and Justin Jones, who made a statement about the humanitarian crisis that the Armenians of Artsakh are subjected to as a result of the Azerbaijani aggression supported by Turkey.

The Proclamation was presented to the Honorary Consul of Armenia in Las Vegas Adroushan Andy Armenian and to Lenna Hovanessian Esq., Co-Chair of the Armenian National Committee of America (ANCA) Nevada.

Amongst the attendees were the Armenian clergy and representatives of the community. However, due to Covid-19, restrictions the number of people in the Government Building was limited, therefore community activists and supporters were gathered outside to welcome the presentation of the Proclamation and to show their appreciation to the Clark County Board of Commissioners.

Ambassador Baibourtian expressed his appreciation to Adroushan Andy Armenian, Honorary Consul of Armenia in Las Vegas and to Lenna Hovanessian Esq., Co-Chair of the ANCA Nevada for their productive work. Moreover, Consul General Baibourtian had weeks ago written a letter to the elected officials of the State of Nevada calling for the recognition of the Republic of Artsakh, presenting relevant argumentation.

Clark County is the largest county in the State of Nevada, and is home to 2.3 million population among 3.8 million in the entire state. The County has jurisdiction over the world-famous Las Vegas Strip, which generated over 45 million visitors in 2019. is especially famous with its Las Vegas city, as it is a world tourist destination center with more than 45 million tourists visiting annually. Clark County is also home to a fast-growing Armenian-American community estimated at 20,000.