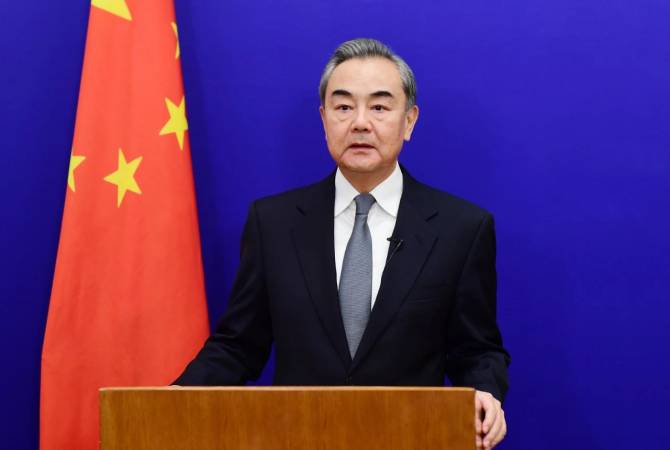 YEREVAN, 23 FEBRUARY, ARMENPRESS/ PARTNER NEWS
Remarks by H.E. Wang Yi
State Councilor and Foreign Minister of the People's Republic of China
At the High-level Segment of the 46th Session of
The United Nations Human Rights Council

It gives me great pleasure to speak at the 46th session of the United Nations Human Rights Council on behalf of the Chinese government.

At this moment, humanity is still in a tough battle with COVID-19. The coronavirus is our common enemy, defeating the virus is our mission, solidarity and cooperation is our only option.

The pandemic has afflicted calamitous impact on humankind. To date, COVID-19 has infected more than 100 million people, claimed over two million lives, and pushed 130 million people back into poverty. Global inequality is exacerbated, the North-South divide is widened, and the right to development is faced with new challenges.

At the same time, racism and xenophobia are re-surfacing. Disinformation and hate speech are spreading. Certain countries are obsessed with politicizing the virus and stigmatizing other nations. Legitimate demand by developing countries for vaccines is not getting adequate attention, and their need is not met.

How to promote and protect human rights in the face of these unprecedented changes around the world and this once-in-a-century pandemic? It is a big question that must be answered with deep reflection. China holds the following views.

Second, we should uphold both universality and particularity of human rights. Peace, development, equity, justice, democracy and freedom are common values shared by all humanity and recognized by all countries. The UN Charter and the Universal Declaration of Human Rights have set out lofty ideals and basic principles for advancing human rights. They should be observed and delivered by all countries. On the other hand, countries differ from each other in history, culture, social system and level of economic and social development. Therefore they must promote and protect human rights in light of their national realities and the needs of their people.

This year is extremely important for China. We will celebrate the 100th anniversary of the Communist Party of China (CPC), and start the new journey toward fully building a modern socialist country. Under the CPC leadership, we have embarked on the path of socialism with Chinese characteristics which is widely endorsed by our people, and found the path of human rights development that suits China's national conditions and needs.

With all rural residents living below the current poverty line lifted out of poverty, we have met the target of eradicating extreme poverty set out in the Agenda 2030 for Sustainable Development ten years ahead of schedule, thus turning into reality the Chinese nation's dream of thousands of years. It is a milestone in our human rights achievement. China's poverty eradication is not just about higher income and living standards. More important, it is also about ensuring every individual's rights to education, healthcare and housing.

Faced with the sudden onslaught of COVID-19, the Chinese government has followed the people-first approach, put the safety and health of every person front and center, and made every effort to safeguard the life and dignity of the people. We also launched a global emergency humanitarian campaign, the largest of its kind since the founding of New China, to extend a helping hand to the countries and international organizations in need. It was one of our concrete steps to honor our commitment to building a global community of health for all.

Vaccines concern the rights to health, subsistence and development of the people, hence the priority of our current endeavors. Global distribution of vaccines must be fair and in particular, accessible and affordable to developing countries. As the first country that pledged to make vaccines a global public good, notwithstanding difficulties at home, China is providing free vaccines to 53 countries in need, and exporting vaccines to 22 countries who have made purchasing requests. The overwhelming majority of them are developing countries. We hope that all countries that have the capability will join hands and make due contributions.

Xinjiang-related issues are in essence about countering violent terrorism and separatism. The Xinjiang region of China has been earnestly implementing the UN Plan of Action to Prevent Violent Extremism, drawing on similar practices of other countries and taking de-radicalization measures in accordance with law. All this is fully consistent with the principles and spirit of the UN Global Counter-Terrorism Strategy. Thanks to the efforts of the local people of all ethnic groups, there has been no violent terrorist case for more than four years in a row in Xinjiang. The region now enjoys social stability and a sound development momentum. And the local people are living a safe and happy life. Between 2010 and 2018, the Uyghur population in Xinjiang increased by nearly 2.55 million, registering a growth rate of 25%. This is much higher than the 13.99% growth rate of the entire population in Xinjiang, and far higher than the 2% growth rate of the Han population in the region. Workers of all ethnic groups in Xinjiang can choose professions based on their own will, and enjoy labor rights and interests. Their personal freedom is never restricted. Xinjiang protects the freedom of religious belief for all ethnic groups in the region in accordance with law. There are more than 24,000 mosques in Xinjiang, and that's one mosque for every 530 Muslims on average. These basic facts show that there has never been so-called "genocide", "forced labor" or "religious oppression" in Xinjiang. Such inflammatory accusations are fabricated out of ignorance and prejudice. They are simply malicious and politically-driven hypes, and couldn't be further from the truth. The door to Xinjiang is always open. People from many countries who have visited Xinjiang have learned the facts and the truth on the ground. China also welcomes the High Commissioner for Human Rights to visit Xinjiang.

The legislation on safeguarding national security in Hong Kong has plugged the long-existing legal loopholes in Hong Kong, and facilitated a major turnaround from turbulence to law and order. It is conducive to the steady and sustained implementation of the policy of One Country, Two Systems. It protects the lawful rights and freedoms that the residents of Hong Kong enjoy under the Basic Law. Nearly three million Hong Kong residents signed a petition in strong support of the legislation. Nearly 70% of the residents feel that Hong Kong is more secure and stable since the national security law took effect. All this speaks volumes about the extensive public support for the legislation. We have every confidence in the future of Hong Kong.

We are at the beginning of the Chinese Lunar Year of the Ox. The ox symbolizes diligence and strength, and heralds a year of harvest and hope. Let us join hands to promote and protect human rights with the people-centered approach and facilitate the building of the community with a shared future for mankind.

In conclusion, I wish this session of the UN Human Rights Council positive outcomes.

Embassy of the People’s Republic of China in Armenia