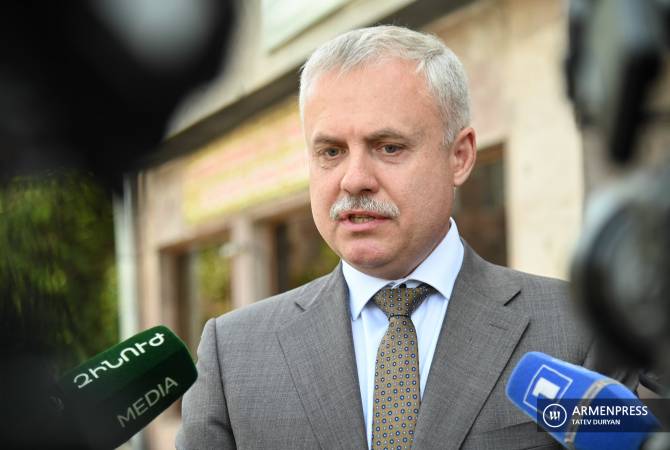 
YEREVAN, AUGUST 10, ARMENPRESS. The Secretary General of the Collective Security Treaty Organization (CSTO) Stanislav Zas says he believes that the opportunities for resolving the Armenian-Azerbaijani border conflict politically aren’t exhausted and it is necessary to continue working in this direction in the Armenia-Azerbaijan-Russia format.

According to Zas, the situation at the Armenian-Azerbaijani border is under permanent focus of the CSTO.

Zas, who is currently on a visit to Armenia, visited a military base of the Armenian Armed Forces in Ararat Province and was asked by a reporter about the proposals the CSTO has developed regarding the resolution of the border situation and why the organization doesn’t issue clear and simple assessment to the incidents taking place at the Armenian-Azerbaijani border.

“We are carrying out organized monitoring, including with the help of Armenian state structures. Of course, we think that the incidents taking place at the border of Armenia and Azerbaijan, which we are talking about, pose a threat to the security of the Caucasus region of the CSTO’s responsibility and of course the security of Armenia, a member of the organization. If we speak about the ways of solving the issue, we believe that the opportunities for a political resolution of the situation aren’t exhausted, and this would actually be the best option for everyone,” Zas said.

Secretary General Stanislav Zas highlighted in this context the working format which is outlined between Armenia and Azerbaijan, through Russian mediation. That is why all actions of the CSTO stem from this very perception of the situation, he added.

“We are seriously concerned that lately the clashes at the border have increased and intensity is seen. This doesn’t contribute to launching the abovementioned work. And besides, this complicates the implementation of the key agreements which have been reached between the leaders of Armenia, Azerbaijan and Russia regarding seeking ways to end the Nagorno Karabakh conflict and establish peace in the region. We expect that all sides will understand this and will take steps to resolve disputes politically,” he said.