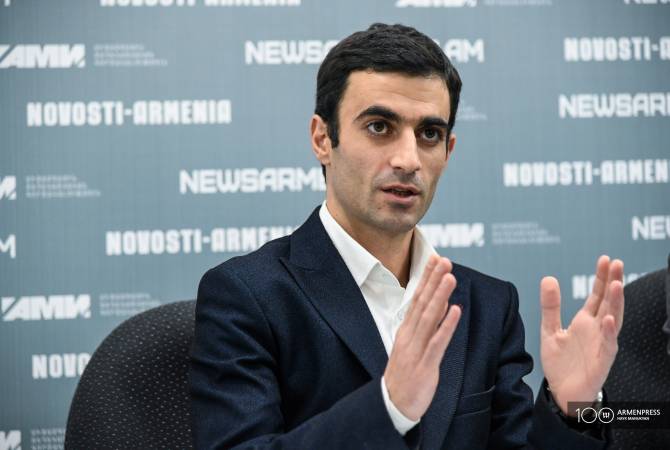 
YEREVAN, SEPTEMBER 1, ARMENPRESS. Contrary to the claims of Azerbaijani President Ilham Aliyev, the norms and principles of the international law did not give Azerbaijan the right or permission to try to solve the Nagorno Karabakh conflict by force, especially when there was an internationally accepted negotiation format in the person of the OSCE Minsk Group, within the frames of which all sides, including Azerbaijan, have assumed a commitment to solve the issue exclusively peacefully and avoid use of force or the threat of force, Expert on Azerbaijani studies Taron Hovhannisyan told ARMENPRESS, commenting on the recent statements made by the Azerbaijani leader.

Mr. Hovhannisyan said there cannot be any justification to a military aggression.

“There is no such norm in international law which allows to solve conflicts by force. It is rejected in the current world order which has been formed after the Second World War”, he said.

Taron Hovhannisyan noted that the norms of international law suppose that conflicts must be solved through peaceful means. And in the case of the Artsakh issue in particular, there have always been the negotiation process and the statements by the international role players that the conflict must be solved peacefully.

In line with its aggressive statements, Azerbaijan is constantly attempting to present the reality in such a way, claiming that Armenia has started the aggression, and they have taken response actions. In other words, they don’t want to state openly that they have started the war and they are the aggressive side because the international law doesn’t like aggressors”, Taron Hovhannisyan said.

However, the analyst states that unfortunately the practical international mechanisms do not exist or are very weak, which would ensure the implementation of the aforementioned international commitments, by restraining the military aspirations of the Azerbaijani side. The expert emphasizes that this allowed Azerbaijan to carry out the aggression of 2020 and remain de facto unpunished.

“In fact, this is what exists de facto. But there is no such thing de jure that any country has a right to solve conflicts by force. Otherwise, there would have been a chaos all over the world”, the expert said.

On August 30 Azerbaijani President Ilham Aliyev has made a statement in the occupied town of Shushi, according to which “the current course of events, the second Karabakh war and the actions of international role players show that the [Nagorno Karabakh] issue could never be solved through negotiations”. Aliyev claimed that all norms and principles of the international law, in particular the UN Charter, the resolutions of the UN Security Council, the “historical justice”, have given a right to Azerbaijan to solve the issue with military means, if it is not solved peacefully.