Heads of Armenian, Georgian parliaments meet in the sidelines of 5th World Conference of Speakers of Parliaments 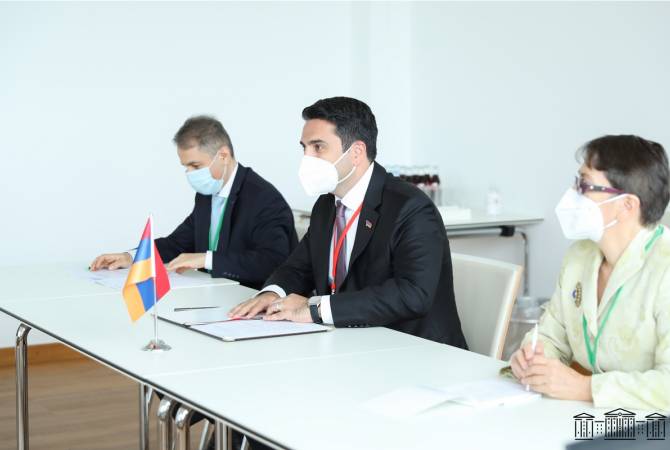 As ARMENPRESS was informed from the press service of the parliament, during the meeting the President of the National Assembly of Armenia noted that Armenia attaches great importance to the sustainable development of friendly relations with Georgia and the deepening of multidimensional cooperation, adding that the cooperation based on the Armenian-Georgian mutual trust is an important factor for security, peace and sustainable development in the region. Alen Simonyan informed his colleague that he attaches great importance to the close cooperation between the legislative bodies of the two countries and the Armenian-Georgian friendship group will be re-formed in the parliament soon, which will promote further effective cooperation.

Speaking about the settlement of the Nagorno Karabakh conflict, Alen Simonyan thanked for all the efforts made by Georgia in this process. Speaker of the Georgian parliament Kakha Kuchava once again congratulated Alen Simonyan on the occasion of being elected President of the National Assembly, assessing it as a good opportunity for giving new impetus to bilateral cooperation. He expressed satisfaction over the activities of the parliamentary friendship groups during the previous convocation of the National Assembly, expressing confidence for more effective cooperation in the future.

Alen Simonyan pointed out the construction of the "Friendship Bridge", which is of strategic importance, expressing conviction that it would best contribute to the deepening of the cooperation of the neighboring states, the growth of trade turnover, development of infrastructures and tourism. He noted that this program, funded by the European Bank for Reconstruction and Development, the governments of Armenia and Georgia, can become a symbol of centuries-old Armenian-Georgian friendship.