Today, no Armenian lives or practically could live in the territories under the control of Azerbaijan – Pashinyan | ARMENPRESS Armenian News Agency

Today, no Armenian lives or practically could live in the territories under the control of Azerbaijan – Pashinyan 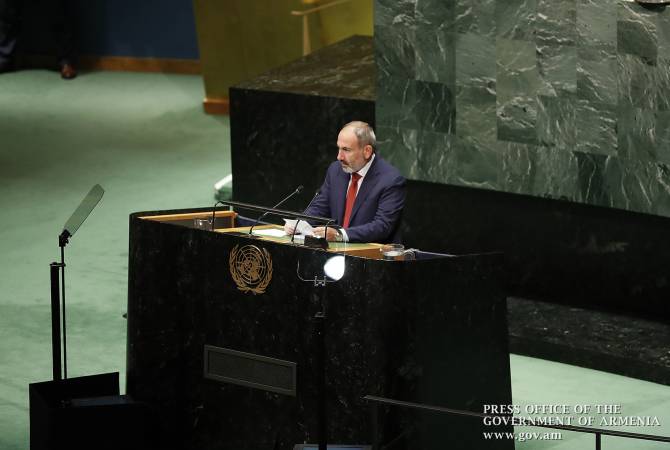 
YEREVAN, SEPTEMBER 24, ARMENPRESS. Prime Minister of Armenia Nikol Pashinyan spoke about the numerous cases of the violations of the international norms by the Azerbaijani armed forces during the 44-day war in his speech delivered at the 76th session of the UN General Assembly, as well as referred to the ethnic cleansings of Armenians in the territories under the Azerbaijani control.

‘’As you know, in the fall of 2020, Nagorno-Karabakh was subjected to aggression. The war that lasted forty-four days took the lives of several thousands of people. Tens of thousands of residents of Nagorno-Karabakh were displaced. The aggression was accompanied by numerous gross violations of international law by the Azerbaijani armed forces, including deliberate targeting of civilians and vital infrastructure, extrajudicial killings of prisoners of war and civilian hostages, torture and many other documented crimes. As a result of these actions, in the parts of Nagorno-Karabakh, which came under the control of Azerbaijan, the Armenian people were subjected to complete ethnic cleansing. Unfortunately, the international community here again could not prevent the mass atrocities. Today, no Armenian lives or practically could live in the territories under the control of Azerbaijan’’, ARMENPRESS reports the PM as saying.

Pashinyan reminded that it was due to the mediation efforts of the Russian Federation that it was possible to stop the bloodshed.

‘’ On November 9, a trilateral ceasefire statement was signed. Peacekeeping forces of the Russian Federation were deployed in Nagorno-Karabakh, which today ensure stability and security thereon’’, Pashinyan added.