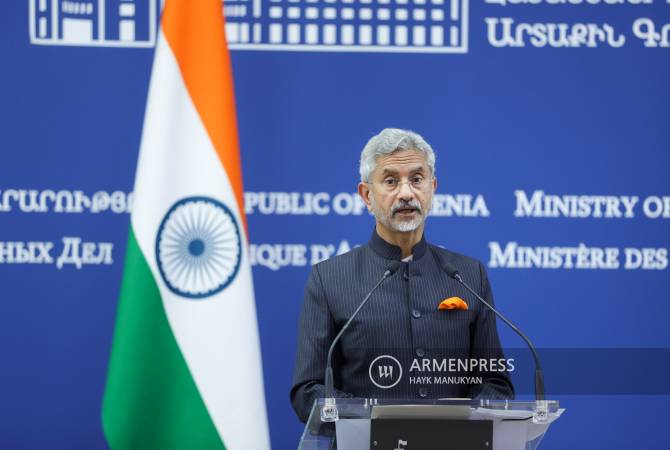 He added that last year Armenia passed a very difficult stage and expressed deep condolences to the Armenian people on behalf of the Indian government and people.

Commenting on his first visit to Armenia, the minister said this is a beginning of a new stage for the cooperation between the two countries. The Indian FM noted that the friendship of the two countries has a history of centuries, starting from medieval times. He stated that they have Armenian heritage, churches, educational institutions in India, adding that the Armenian heritage has been preserved with great attention and respect. The minister also emphasized the great contribution brought by the Armenian community to the history of India.

As for his meeting with the Armenian FM, Minister Jaishankar said they had very productive meetings. “We outlined our comprehensive bilateral relations, discussed the bilateral issues and mainly agreed on the future cooperation and exchange. We agreed that our bilateral relations have expanded in cultural, political fields. There is still a great opportunity to expand the economic relations, tourism, infrastructure and investments fields”, he added.

He emphasized that Armenia is a member of the Eurasian Economic Union (EAEU), noting that currently discussions are underway on a trade agreement between India and EAEU.

The Indian FM also informed that they have discussed with his Armenian counterpart the possibility of mutual flights. “We view Armenia as a closely cooperating country”, the Indian Foreign Minister said.