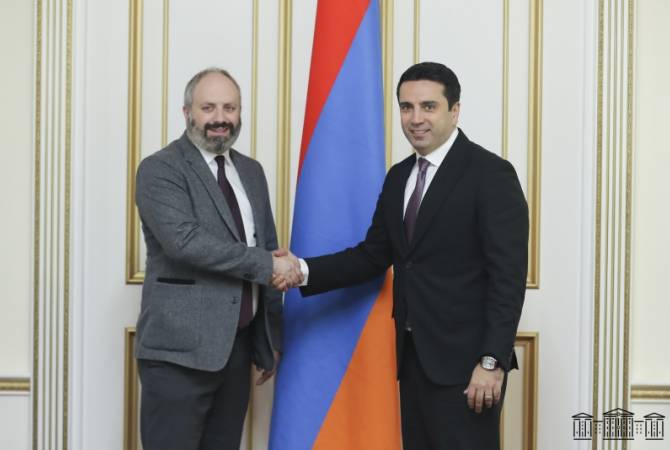 
YEREVAN, OCTOBER 13, ARMENPRESS. Speaker of Parliament of Armenia Alen Simonyan received today the Chairman of the Montreal Chapter of the Armenian General Benevolent Union (AGBU) Chahé Tanachian and the Secretary of the Chapter Hagop Arslanian, the Parliament’s press service said.

Welcoming the guests, Alen Simonyan highly assessed the activities of the structure aimed at a number of spheres. The Head of Parliament expressed readiness to support all initiatives and programs being implemented in Armenia aimed at strengthening the homeland.

The guests presented the priorities of the AGBU Montreal organization, pointing out the main programs which would be implemented in Armenia.

During the meeting the post-war situation in Armenia was touched upon. In this context the Chairman of the Montreal Chapter Chahé Tanachian presented the approaches existing on the post-war situation in the Diaspora, and particularly, in Canada. The Speaker of Parliament has underlined that at this moment the issue of the urgent repatriation of Armenian prisoners of war and the civilians being kept in Azerbaijan remains of priority.