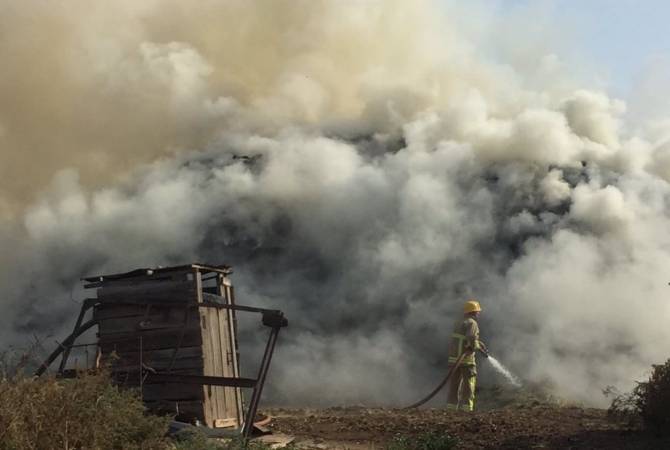 
YEREVAN, OCTOBER 15, ARMENPRESS. The Offic eof the Human Rights Defender of Armenia issued a statement about Yeraskh village of Armenia’s Ararat Province, which is under regular shootings of the Azerbaijani armed forces. ARMENPRESS reports, the statement runsa s follows,

“Yeraskh village of Ararat province is subjected to regular shootings by the Azerbaijani armed forces, both during the day and night.

Today, on October 15, 2021, the village has been subjected to shelling again.

The unruliness of the Azerbaijani servicemen has reached such a level that they set fire through intentional shootings to 8000 stacks of grass belonging to a resident of Yeraskh community. The entire winter stockpile, which the citizen had collected to feed his livestock, has been destroyed.

Moreover, the fire spread destroying the roof of the barn belonging to the citizen. The fire was extinguished only by the timely intervention of the firefighters, saving the remaining part of the roof.

These facts were studied and confirmed by the Human Rights Defender of Armenia through the alarming-calls addressed to the Defender, the collected subjective evidence, and verified data from various sources. The fact of the Azerbaijani shootings in the direction of the positions of the Armenian Armed Forces protecting the population of Armenia was also confirmed by The Ministry of Defense of Armenia.

The process of creating a demilitarized security zone around the borders of Armenia with Azerbaijan and the removal of the Azerbaijani armed servicemen form the vicinity of the villages and from the roads between the communities of Armenia should start immediately.

The proposal of the Human Rights Defender of Armenia has already been included in an international instrument- in Resolution 2391 (2021) of September 27, 2021 of the Parliamentary Assembly of the Council of Europe (PACE). The Human Rights Defender will send relevant reports about this situation to international organizations, to the State bodies of Armenia, and to civil society organizations.

It is evident that the basis of these criminal harassments and the gross violations of human rights is the same: The policy of Armenophobia and enmity, and of ethnic cleansing and genocide of the Azerbaijani authorities. This policy has institutional bases, and until the perpetrators are punished, the violations will not end, and the security of the people will not be guaranteed”.