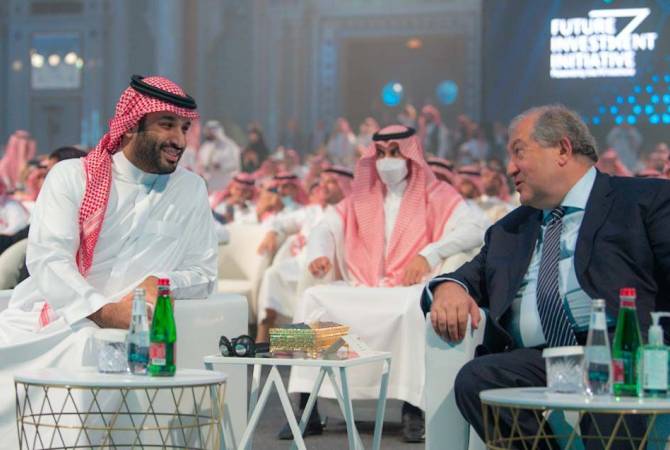 
YEREVAN, OCTOBER 27, ARMENPRESS. Armenian President Armen Sarkissian and the Crown Prince of the Kingdom of Saudi Arabia Mohammed bin Salman discussed the necessity of developing the relations between Armenia and Saudi Arabia, the Armenian presidency said in a news release.

President Sarkissian was present with the Saudi Crown Prince, First Deputy Prime Minister and Minister of Defense Mohammed bin Salman at the opening ceremony of the 5th Future Investment Initiative Forum in Riyadh.

“President Sarkissian made the first visit in the history of the newly independent Armenia to one of the most important countries of the Arab and Muslim world – the Kingdom of Saudi Arabia”, the presidency said in a news release. “The president of Armenia and the Crown Prince of Saudi Arabia talked about the necessity of developing, and the future of, the relations between the two countries. It was mentioned that the rich historical interactions between the two peoples are a good foundation for building future-oriented interstate relations.”

Sarkissian’s office characterized his visit to Saudi Arabia as a trip of “exclusive significance in the history of the Armenian-Arab and particularly the Republic of Armenia-Kingdom of Saudi Arabia relations.”

21:02, 12.01.2021
Viewed 1862 times Lavrov speaks about Russia's role in finding solutions to issues of dispute between Armenia and Azerbaijan