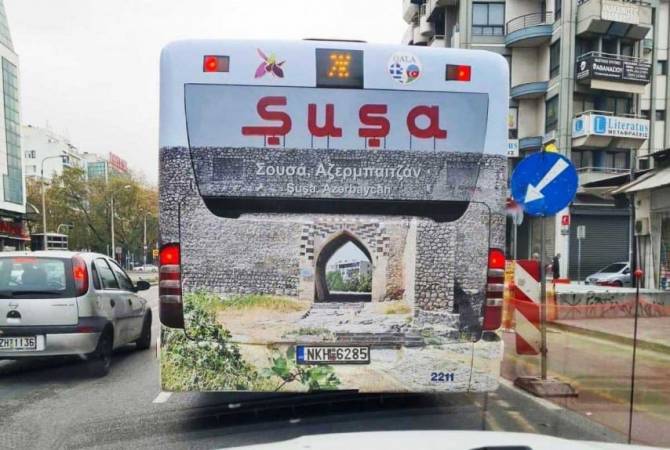 
YEREVAN, NOVEMBER 24, ARMENPRESS. The Azerbaijani advertisement on public transport in the Greek city of Thessaloniki with the words "Shushi is Azerbaijan" was removed by the efforts of the Armenian Embassy, community structures, the Greek-Armenian Chamber of Commerce and the Armenian National Committee of Thessaloniki, Ambassador of Armenia to Greece Tigran Mkrtchyan told ARMENPRESS.

"We contacted and worked with the Thessaloniki authorities, including the executive branch, and explained that the ads should be removed immediately, as they are political in nature and provocative. Within a few hours, the Greek authorities reported that the advertisement had been removed from the bus," the Ambassador said.

He stressed that such actions by Azerbaijan can be expected not only in Greece, where there is a small Azerbaijani community, but also in other countries. "With such provocative steps Azerbaijan is simply trying to present and perpetuate the results of the use of force as a reality, while we know for sure that the issue of the status of Nagorno Karabakh remains open. All the OSCE Minsk Group Co-Chair countries have talked about it. It turns out that with such methods Azerbaijan is trying to "record" once and for all that Shushi is Azerbaijani, that the return of Shushi to Nagorno Karabakh cannot be considered. But Nagorno Karabakh has its clear administrative borders, Shushi, like Hadrut, are definitely within those borders. Shushi and Hadrut are currently occupied. With such steps, Azerbaijan is trying to make the impression that the issue is closed. Azerbaijan goes against the logic of the negotiation process. I consider this step as a provocation, especially in a friendly country like Greece, whose authorities have more than once expressed solidarity with the positions of Armenia. With such a provocative step they are trying to put some tension in the Armenian-Greek relations, which, of course, will be a failure”, Ambassador of Armenia to Greece Tigran Mkrtchyan said.

13:12, 05.10.2022
2480 views Armenia’s proposals handed over to Azerbaijan in Brussels include also status, security of Artsakh – Ambassador-at-large