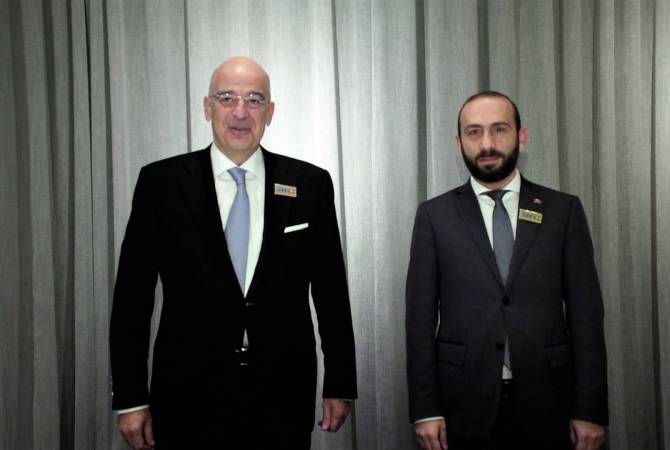 
YEREVAN, DECEMBER 3, ARMENPRESS. On December 2, within the framework of the OSCE Ministerial Council, Foreign Minister of Armenia Ararat Mirzoyan held a meeting with Foreign Minister of Greece Nikos Dendias in Stockholm, the Armenian foreign ministry reports.

The Foreign Ministers commended the dynamics of political dialogue between the two countries, highlighting in this regard also the importance of promoting contacts at the parliamentary level.

Minister Mirzoyan expressed his gratitude to the Greek Government for its support during the difficult period for Armenia, as well as for providing humanitarian aid to Artsakh aimed at overcoming the crisis resulting from the Azerbaijani aggression against the people.

The Foreign Ministers of Armenia and Greece also exchanged views on regional and international issues of mutual interest. Ararat Mirzoyan presented to Nikos Dendias the situation resulting from the recent aggression unleashed by the Azerbaijani armed forces against the sovereign territory of the Republic of Armenia and the following developments.

They also exchanged views on the peaceful settlement of the Nagorno Karabakh conflict. Minister Mirzoyan emphasized the position of the EU and EU member states on the comprehensive settlement of the NK conflict under the mandate of the OSCE Minsk Group Co-Chairmanship.

The need for the immediate repatriation of prisoners of war and other detainees, as well as for ensuring unimpeded access of international organizations to ensure Artsakh was emphasized.