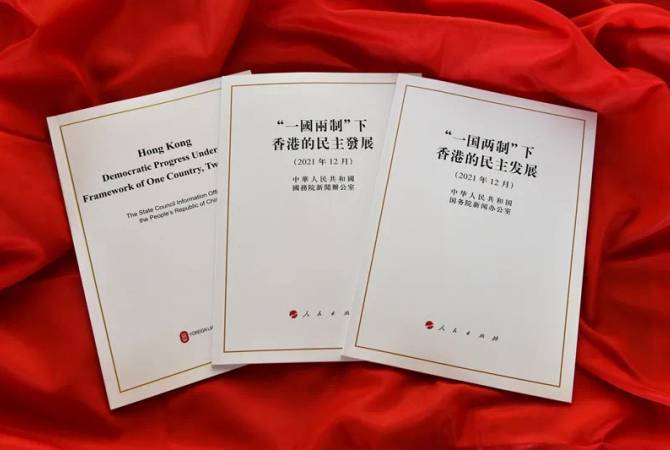 The white paper presented a comprehensive review of the origin and development of democracy in the Hong Kong Special Administrative Region (HKSAR), and the principles and position of the central government.

Under British colonial rule, there was no democracy in Hong Kong, it said.

The white paper pointed out that after resuming the exercise of sovereignty, the Chinese government implemented the basic policy of "one country, two systems" and established democracy in the HKSAR.

It has since provided constant support to the region in developing its democratic system. "The determination, sincerity, and efforts of the Communist Party of China (CPC) and the Chinese government to this end have remained consistent and are obvious to any objective observer," it read.

Facts have proved time and again, the anti-China agitators in Hong Kong and the external groups behind them must be held to account for impeding Hong Kong's progress towards democracy, the white paper noted.

To put an end to the political turmoil in Hong Kong in recent years, the CPC and the central government have taken a series of major decisions, the white paper said.

It noted measures including strengthening the central authorities' overall jurisdiction over the HKSAR in accordance with the Constitution and the Basic Law, improving the relevant systems and mechanisms to enforce the Constitution and the Basic Law, reinforcing the legal framework and enforcement mechanisms for safeguarding national security in the HKSAR, and improving the region's electoral system.

Such measures have restored order to Hong Kong, returning the democratic process to a sound footing, said the white paper.

"The principle of 'one country, two systems' provides the fundamental guarantee for the development of democracy in HKSAR," it said.

"To ensure that 'one country, two systems' will make steady progress, and to further the development of democracy in Hong Kong, we must remain committed to the principle that Hong Kong is governed by Hong Kong patriots," it added.

The white paper stressed that a path to democracy with Hong Kong characteristics should be explored under the policy of "one country, two systems" and the Basic Law and in keeping with Hong Kong's political, economic, social, cultural and historical conditions.

The white paper hailed the "one country, two systems" policy as a creative innovation of the CPC and the Chinese government that has proved to be a great success in Hong Kong.

Rooted in the motherland, and buttressed by democracy and the rule of law, a free and inclusive Hong Kong will continue to prosper, to enjoy enduring stability and harmony, and to open itself to the world, the white paper said.