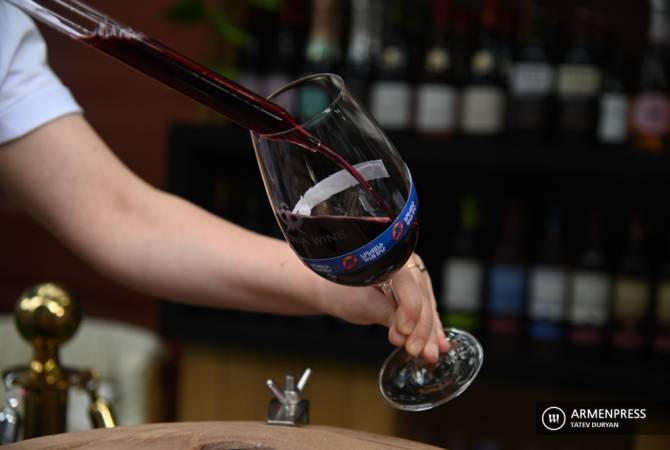 From January 1, only the kind of wine made from grapes can be called “wine”, and the other fruit wines – for example pomegranate wines – will be classified as “Fruit Alcohol Production”, and therefore will be sold among cheaper alcoholic drinks. This move created problems for Armenian exporters.

Vine and Wine Foundation of Armenia Director Zaruhi Muradyan sat down with ARMENPRESS over the matter.

“Professionally speaking, indeed ‘wine’ is called the drink that is made from grapes”, Muradyan said.

Muradyan says Armenia produces nearly 6 million liters of fruit wine, with 4,7 million liters being exported. This figure is growing every year in the recent years, she said. Moreover, nearly 80% of these exports go to Russia.

Pomegranate wine is made from pure pomegranate in Armenia, and over time this drink has become somewhat of a national drink in Armenia. This is why, Muradyan says, it is inadmissible to consider the Armenian pomegranate to be a non-natural, flavored drink.

“Therefore, together with wine producers we are thinking about creating an entirely new category of pomegranate wine, and introducing it into the market with this new category,” Muradyan said, admitting that this would take some time.

Before this happens, Armenian fruit wine producers will face problems in exporting to Russia. For example, Russian importers could potentially opt out from working with producers of non-grape wines because sales might drop in their market. “Russian consumers are very sensitive to these type of changes, and if fruit wines were to be placed on other shelves with other labels, this might seriously reduce sales,” she said.

The International Organization of Vine and Wine is also considering introducing the same changes like the Russian authorities.

“And the sooner we think about how to re-position and protect what we have the better. Right now, we can give some temporary solution, negotiate to get permission to continue labeling it the same way for six months or some given period of time, but sooner or later we will face this problem,” Muradyan said.

The Gevorkian Winery, for example, is exporting wine to Russia since 2009. It is exporting somewhere between 200,000 – 250,000 bottles of wine, including 7 types of fruit wine, to Russia alone. And in December last year it carried out exports already with the “Fruit Alcoholic Product” labeling.

“The importing company very well understood that it wouldn’t be able to sell it if it said “fruit wine” on the bottles. That’s why we changed the labels. There are fruit wine producers in Russia who make it from powders and flavors, and that’s why their government wants to prevent this,” Gevorkian Winery founding director Vahagn Gevorkian said.

Gevorkian says they are working with the Vine and Wine Foundation to ask the government to create an individual category and standard for pomegranate wine, just like cognac and champagne in France.

They will further try to advance this standard in the entire Eurasian Economic Union for confirmation in member states.

After that,  Gevorkian said they will push for international confirmation and then develop Granatus as a geographical indication (GI) – meaning only the drink made in Armenia can be called Granatus.

Gevorkian also mentioned that he has information that Armenian government officials have already negotiated with Russian counterparts and achieved a preliminary agreement regarding the pomegranate wine within the framework of the EEU.