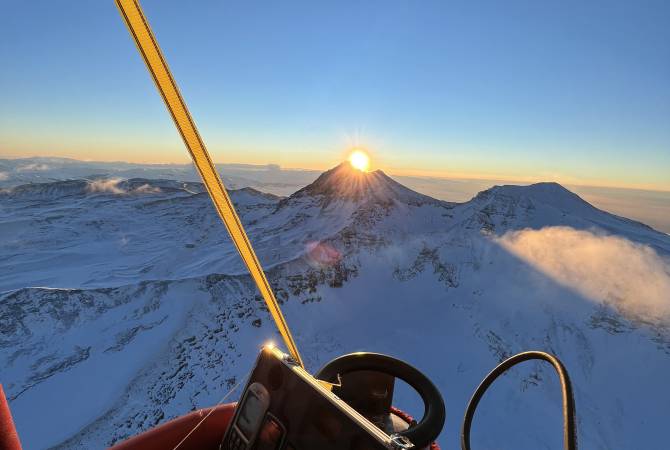 
YEREVAN, JANUARY 17, ARMENPRESS. An Armenian pilot plans to attempt a world-record breaking flight on a hot air balloon which will last for nearly 35 hours.

Ahead of the record attempt, Skyball pilot Nairi Barseghyan and his partner from Russia Sergey Bazhenov conducted a test flight on January 17 in Armenia, flying from Gyumri to Yerevan over the summit of Mount Aragats.

“We are now preparing for a world record attempt which failed last year due to technical problems, but this year we are already ready and we are waiting for the required weather. We will conduct the record flight in Russia, it will be the longest flight without landing, approximately 35 hours. During the last month we've been monitoring the weather for 24/7, wind direction and so on. Until then, we saw that the weather will be favorable on January 17 and we decided to conduct an exclusive flight from Gyumri to Yerevan over Aragats,” Barseghyan said.

The hot air balloon took off from the central plaza in Gyumri, and passed the Aragats summit and reached an altitude of 6100 meters, and then landed in Yeghvard. The pilot says the flight was a good chance to test the special gear and equipment, because the temperature in Russia will be as low as -35 °C.

The flight is planned to take place in February, when weather conditions will be favorable.