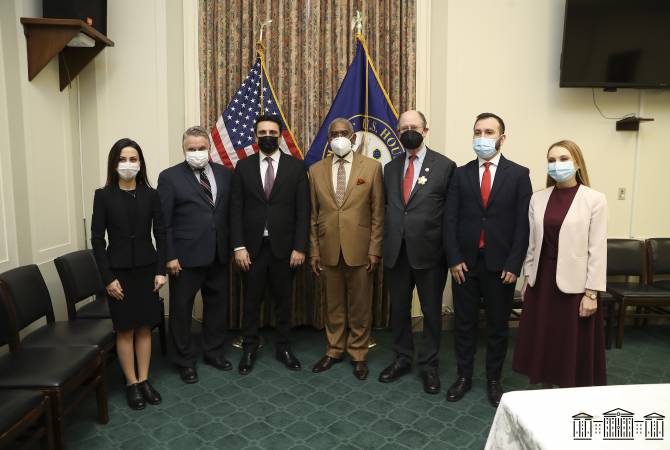 
YEREVAN, JANUARY 20, ARMENPRESS. The delegation led by Speaker of Parliament of Armenia Alen Simonyan met with the Chairman of the House Foreign Affairs Committee of the U.S. House of Representatives Gregory Meeks, Brad Sherman and the Republican Chris Smith, the Armenian Parliament’s press service reports.

Welcoming the members of the delegation, the Chairman of the House Foreign Affairs Committee Gregory Meeks has noted that they have paid special attention to the democratic processes in Armenia since 2018. He also expressed readiness to always support those reforms.

Issues related to the 44-day war and its consequences were discussed at the meeting. At the request of American partners, Alen Simonyan touched upon the issues of security of the Armenian border, the settlement of post-war humanitarian problems and the repatriation of hostages held in Azerbaijan. The American side informed that the U.S. House of Representatives, and in particular their Committee, is strictly concerned about the fate of prisoners of war and thinks that they should be immediately repatriated to their homeland. During the meeting, the Chairman of the Committee has emphasized that it is very important to ensure the stability of the South Caucasus and in that context, it is necessary to reach a solution to the Nagorno-Karabakh conflict and a lasting settlement of the issue. The United States will greatly contribute to that, including in the format of the OSCE Minsk Group.

Alen Simonyan underlined the importance of the recognition of the Genocide by the U.S. House of Representatives of the Congress at the meeting, emphasizing the role of the Foreign Affairs Committee. Thanking to the Armenian Speaker of Parliament for the high assessment, those present once again stressed that it was really the result of the continuous work.

At the end of the meeting, Alen Simonyan has informed that a number of events and mutual visits are planned within the framework of the 30th anniversary of the establishment of the diplomatic relations between Armenia and the U.S. The Speaker of Parliament invited the Chairman of the House Foreign Affairs Committee of the U.S. House of Representatives and its members to visit Armenia to get acquainted with the existing problems and the democratic achievements on the spot.