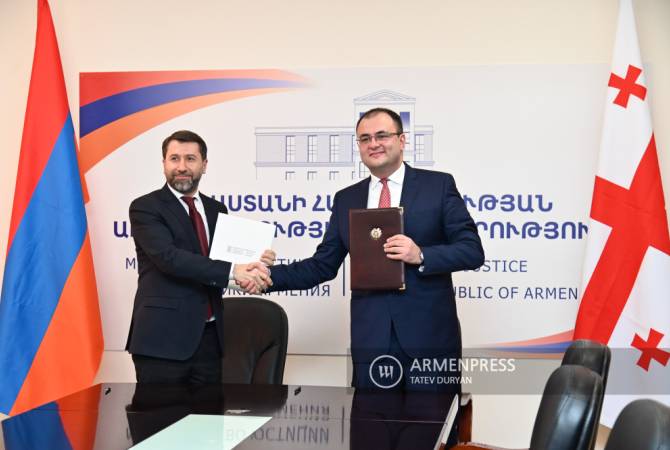 “We have a broad agenda that we’ll try to cover during the next two days,” Andreasyan said, thanking Minister Bregadze and his delegation for visiting Armenia.

“During our first meeting, which took place in Italy during the European Council’s ministerial meeting, we raised a number of issues of concern for Armenia, because we are currently undergoing important reforms. The other important direction is the unified offices where the citizens of our countries receive all public services. Armenia has excellent lasting experience in this very sector and the practice of introducing the Justice Houses which Georgia has implemented is very important for us, because we are just starting the formation and development of the Justice Houses,” Andreasyan said.

In turn, the Georgian Minister of Justice thanked Andreasyan for the warm reception and said: “We agreed in Venice that we’ll actively cooperate and I am glad that we’ve already started the work. Currently Armenia and Georgia have very warm relations. I think there has never been this kind of relations. And this is certainly thanks to our prime ministers. I am sure that our meeting and cooperation is the reflection of the relations and I hope that we will also warmly and closely cooperate and that we will contribute to the development of the two countries with our work,” Minister Bregadze said.

Minister Bregadze added that they’ve brought their mobile Justice House and an innovation device which enables persons under probation to receive all services that are being rendered at probation bureaus.

Minister Andreasyan and Minister Bregadze agreed to organize a Congress of Armenian and Georgian Lawyers in Georgia in February.

“We’ve agreed to work in the direction of fighting falsification of documents, this will enable to protect the rights of the citizens of our countries. We will also jointly contribute to education and carry out student exchange. At the initiative of Karen Andreasyan we will very actively cooperate in the sector of [extradition] of convicted prisoners and detainees,” the Georgian Minister of Justice said.