US administration will continue supporting the development of Armenia's democratic institutions. Ambassador 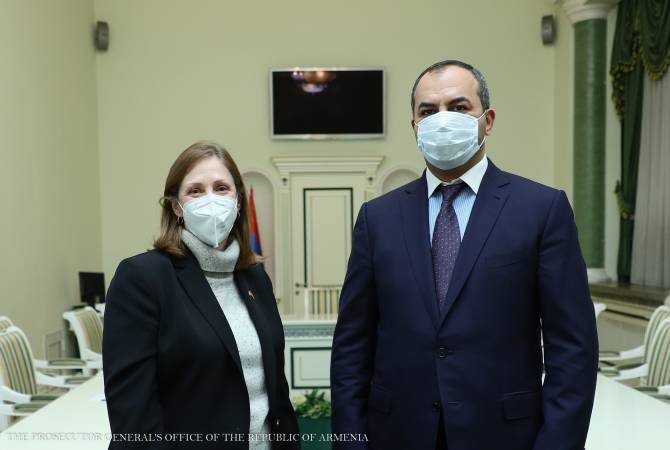 
YEREVAN, FEBRUARY 10, ARMENPRESS. The Prosecutor General of the Republic of Armenia Arthur Davtyan received the Ambassador Extraordinary and Plenipotentiary of the United States of America to the Republic of Armenia Lynne Tracy. On February 10. She was accompanied by Alexis Haftvani, Head of the U.S. Embassy's Bureau of International Narcotics and Law Enforcement Affairs and Cristina Hansell, Human Rights Officer at U.S. Embassy, ARMENPRESS was informed from the press service of the Prosecutor General’s Office.

The Prosecutor General praised the efforts of the US Government and personally the US Ambassador to Armenia, aimed at deepening bilateral cooperation in the legal sphere, developing the capacity of the Prosecutor's Office in specific directions. Special importance was attached to the introduction of the institution of confiscation of property of illegal origin in Armenia, as well as to the consultative and technical assistance provided for the training of Armenian prosecutors in the areas of protection of human rights, illicit enrichment, the fight against hyper-crime and other areas.

Arthur Davtyan noted that the Prosecutor's Office of Armenia is persistent in the fight against corruption, especially in returning the stolen assets to Armenia which had been embezzled from the state budget, and stressed the importance of deepening cooperation with the United States within the framework of mutual legal assistance.

Ambassador Tracy thanked for the opportunity to discuss issues of interest. She stressed that the 30th anniversary of the Armenian-American partnership is being marked and conveyed the US administration 's readiness to continue supporting the development of democratic institutions, the strengthening of human rights protection structures, and the efforts of the Armenian authorities in the fight against corruption.

During the meeting, the parties expressed their views and expectations on the issues of mutual legal assistance, conducting investigative inquiries, extradition, implementation of new programs based on the assessment of the needs of the Armenian Prosecutor's Office and other issues.