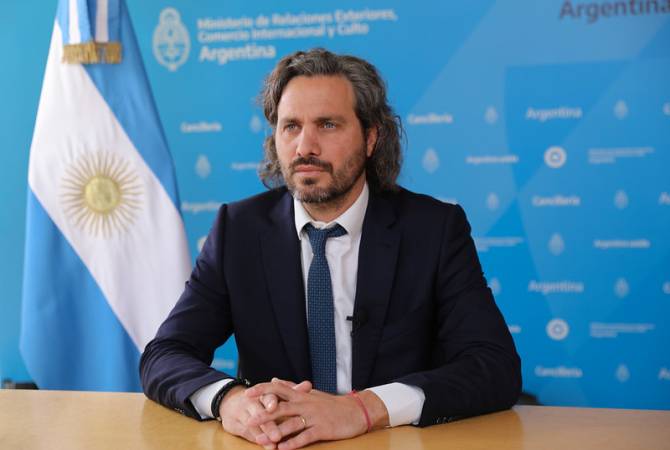 
YEREVAN, FEBRUARY 14, ARMENPRESS. Argentina is in the list of at least top ten countries with the largest investment flows to Armenia. Based on the potential existing in the two economies, there are reasonable expectations that it’s possible to increase the trade volume. The political dialogue between Argentina and Armenia is developing harmoniously, with a determination to look for new areas for cooperation, Santiago Andrés Cafiero, Minister of Foreign Affairs, International Trade and Worship of Argentina, said in an exclusive interview to ARMENPRESS.

- This year Armenia and Argentina celebrate the 30th anniversary of the establishment of the diplomatic relations. How do you assess the current level of relations between the two countries? In your view, how is the political dialogue developing?

- On the occasion of the 30th anniversary of the establishment of the diplomatic relations between the two countries, on January 17 we exchanged letters with my counterpart Ararat Mirzoyan where we both highlighted the historic friendly ties connecting our nations and the common vision to the future from the general horizon of friendship and cooperation.

In this respect, I found it appropriate to remind that Argentina’s recognition of Armenia as a sovereign and independent state took place in 1920. Later, after the collapse of the Soviet Union, we established diplomatic relations in early 1992. Firstly, Armenia opened its embassy in Argentina in May 1994, and then my country opened its embassy in Armenia in May 2010.

Argentina positively assesses the bilateral relations with Armenia, which have firm grounds and are based on the long-term traditions of friendship and cooperation between our nations. In this context, the political dialogue is developing harmoniously, with a will by our side to constantly deepen the ties and search for new areas of cooperation.

- The COVID-19 pandemic affected the economic ties of all countries in the world. It also negatively affected Armenia’s trade turnover volumes. The commercial ties of Armenia and Argentina are quite modest, but do you see a potential for boosting those ties and in which sectors? Which areas of Armenia’s economy are interesting to the Argentine businessmen aimed at establishing new ties?

- I agree with your view concerning the negative consequences the pandemic left and still leaves, in all terms, including on the relations of countries. If we talk about the economic relations generally, over the past decade Argentina has been positioned in the list of at least ten leading countries with the largest investment flows to Armenia. In the whole Eurasia, Argentina managed to have such a positioning only in Armenia, and I think this fact should be highlighted. On the other hand, it’s true that our trade exchanges are still modest. But based on the potential that we see in our two economies, we have reasonable expectations that we will be able to increase the volume of our trade. In this sense, the establishment of the Argentine Chamber of Commerce in Yerevan in September 2021, which was promoted by our embassy, will be an important tool to continue the development of trade, will serve as a bridge between the businessmen of the two countries, will promote the small and medium entrepreneurship and will involve young experts.

With the same logic, in August 2021, a Memorandum of Understanding was signed between Enterprise Armenia and Argentina Investment Agency and International Trade, which will enable to strengthen the joint trade-economic initiatives. In other words, even during the pandemic we managed to take targeted steps directed to the growth of our trade exchanges.

- Armenia and Argentina are developing their cooperation also in multilateral international platforms. Argentina chairs this year the United Nations Human Rights Council in Geneva led by Federico Villegas. Recently Armenia’s representative Andranik Hovhannisyan has been elected as Vice President to the Council. How would you describe the partnership of the two countries in multilateral platforms and what prospects do you see for deepening that cooperation?

- Our countries share values and visions which are reflected in multilateral sector by concrete steps aimed at fighting poverty, reducing inequalities, creating dignified work, which will lead to an equal economic development. These are just some of the directions. There are common positions and a wide range of opportunities in all these initiatives so that we can work together with our Armenian friends. In this respect, in the moment of international relations, as it is today, with so many challenges facing the international community, multilateralism becomes a priority, like ever before, as the most important and useful tool which those countries must use that have inclination and commitment to give answers to the most urgent issues such as global warming, the fight against gender inequality or the preservation of international peace and security.

In the search for solutions to these and other issues our countries have common views and deep commonalities, which, undoubtedly, could create smart and effective proposals in various areas where these issues are being raised and discussed.

- There is an Argentine school, a square in Yerevan. The busts of Argentine General, politician Manuel Belgrano and National Hero of Argentina, General José de San Martín are erected in Yerevan. There is a Buenos Aires Park in one of the districts of Yerevan. Despite the long distance, the cultures of the two countries are very close. How do you assess the current level of humanitarian ties, and what new joint initiatives can we witness in the future?

- It’s a pleasure for me to know about the presence of Argentina in Armenia. Here as well, like in Buenos Aires and Córdoba, there are public places connected with Armenia, such as the section of the Acevedo street, between Córdoba and Sante Fe avenues, has been named “Armenia” in 1983, on the occasion of the visit of Supreme Patriarch and Catholicos of All Armenians, His Holiness Vazgen I to Argentina.

A section of one of the most traditional and oldest neighborhoods of Buenos Aires, Palermo, hosts many structures connected with Armenia and is the traditional center of the community. The Armenian center, the St. Gregory the Illuminator Cathedral and various stores are located there. All these are very popular and respected structures.

In its turn, in Córdoba, the main residence of the community is in Pueyrredón district, where the St. George Armenian Apostolic Church, the Armenian Evangelical Maranata Church and the Sahak Mesrob school dedicated to bilingual education are located.

All these institutions, alleys, parks and schools openly highlight the deep connection that testifies to the relations between our countries both at spiritual and material level. Everything seems to hint that we only have a way to deepen and strengthen this in the future, the continuation of promotion of these ties depends on us.

- Argentina is a warm and caring home for quite a large Armenian community. How do you assess the community’s role in the deepening of the bilateral relations, the strengthening of spiritual and cultural ties?

- The strong Armenian community plays a very important role in the development of the relations of the two countries. The contacts, exchanges between peoples, travels and visits keep alive the communication with the country of origin, and at the same time, spread the traditions, the way of thinking and many expressions of the rich Armenian culture in Argentina. Therefore, their contribution to the national construction is reflected in many areas and has been very significant.

I also know that the talk is about a very well organized community that has many institutions which try to preserve the traditions and culture, in which there are newspapers, churches and schools which teach and spread the Armenian language.

Of course, the community is very important capital in our bilateral relations.