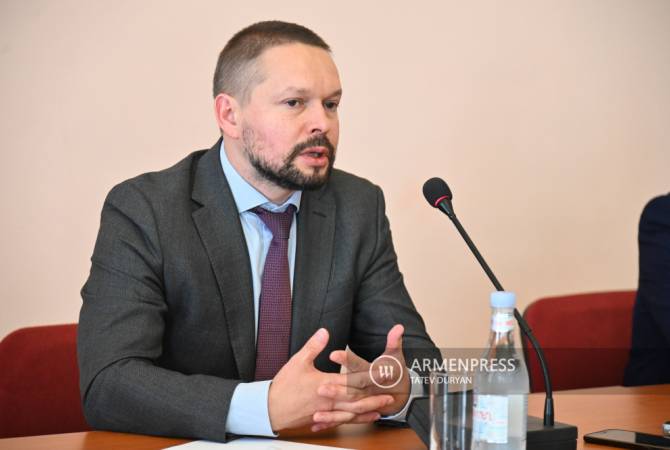 
YEREVAN, FEBRUARY 21, ARMENPRESS. Russian and Armenian experts want to place the bilateral dialogue at expert level on such an institutional basis which on the one hand will unite the influential political analysts, commentators and academicians, and will ensure connection with policy makers on the other hand.

Nikolai Silaev, researcher at the Institute for International Studies at MGIMO, has discussed this issue recently with the Armenian expert community in Yerevan.

Explaining the necessity of creating an Armenian-Russian permanent expert dialogue platform, the Russian expert on international studies told Armenpress that Armenia is Russia’s ally, and its significance is gradually increasing. He added that Russia’s role for Armenia has also increased. However, according to him, sometimes Moscow and Yerevan do not so well perceive the mutual approaches and policies on this or that issue. Silaev says this expert platform could contribute to solving this issue.

“I wanted to understand how my Armenian colleagues react to the prospects of Armenian-Russian-Azerbaijani trilateral discussions at expert level. Such attempts were made and will be made, but I would like to know the moods of Armenia’s expert community”, he said.

Asked how Armenian experts react to idea of creating an Armenian-Russian permanent expert platform, he said he has an impression that most of his colleagues in Armenia believe that it’s necessary to strengthen the alliance with Russia, the ties also at the expert level, and that the two countries are interested in the strengthening and development of the bilateral relations, this alliance. “However, I suppose that Russia’s position and stance on this or that issue are not so well explained. It’s not always stated very clearly. Therefore, a lot of work still needs to be done in this field”, he added.

Asked what kind of a trilateral meeting he was talking about in Armenia-Russia-Azerbaijan trilateral format, the expert said: “I would not like to talk about the meeting yet because the talk is not about some kind of planning. What is the logic of Russia’s policy today? The logic is that Russia acts as the key guarantor of maintenance of peace in and around Nagorno Karabakh, and we are interested in that our guarantees are conditioned not only by the presence of the Russian peacekeepers in Karabakh, but also by more intensive diplomatic contacts, solution of the problem of unblocking transportation ties and promotion of the whole agenda well known to you. You know, in such cases, my colleagues use “strengthening of trust” and similar other terms. But I cannot talk about the strengthening of trust because it’s obvious that this mistrust is very big”, he said.

Presenting his conclusions from the meetings held in Yerevan, he said the approaches are different, the issue is and will remain very sensitive for a long time.

When asked to comment on whether it’s Russia’s today’s approach to activate and start any dialogue between Armenia and Azerbaijan, the expert said “the dialogue is being held at political, inter-state level, and over the past more than a year all actions of Russia have obviously shown that Russia supports that dialogue”.

“The dialogue at expert level has one weak side which is also its strong side. It doesn’t suppose political obligations of the sides. It means that people, who are involved in that dialogue, could discuss a broad range of issues and more freely than the diplomats do. That is the essence of the Second Track Diplomacy to talk freely, in details with no political obligations and concrete agreements, which have a nature of an order for a diplomat.

We understand that miracles do not happen, and it would be naïve to expect that people will quickly approve the Second Track Diplomacy format. But this format allows to develop new ideas, to more thoroughly understand the position of the other side, allows to search for new steps, after which diplomats could use or not. The talk is about this if this idea turns into practice one day”, he said.

Asked whether similar meetings are expected with the Azerbaijani experts in Baku, he said: “I recently visited Baku for a Russian-Azerbaijani expert council, which is organized by the Russian International Affairs Council, and during that meeting there was a chance to discuss also the issue which we have just talked with you. And I have an impression that my Azerbaijani colleagues are more inclined in favor of such an expert dialogue with the Armenian side”.