‘Original bond has not been destroyed’: Hungarian Deputy PM on prospects of restoring diplomatic ties with Armenia 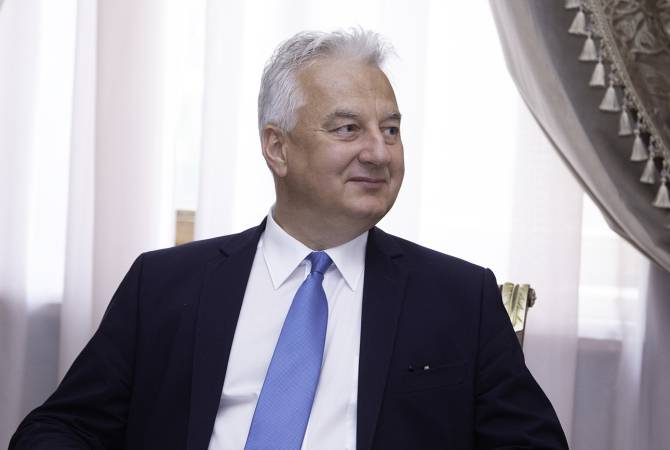 
YEREVAN, FEBRUARY 23, ARMENPRESS. Hungarians have always shared the grief of Armenians over the painful event of the murder of Armenian officer Gurgen Margaryan in 2004, but they also feel it is time to open a new page and look towards a more hopeful future, State Secretary for the Aid of Persecuted Christians and the Hungary Helps Program H.E. Tristan Azbej said in a joint interview together with Deputy Prime Minister of Hungary H.E. Dr. Zsolt Semjén exclusively for ARMENPRESS.

ARMENPRESS: Mr. Deputy Prime Minister, how would you describe the cultural-historic ties between the Armenian and the Hungarian peoples, and the contribution of the Armenians and the Armenian community to the centuries-old history of Hungary?

H.E. Dr. Zsolt Semjén: The Armenian community has been present in Hungary for centuries. Our king, Andrew II has visited Armenia, where he almost arranged the marriage of his son to the daughter of King Levon II. The origin of the names of the localities around Esztergom – the capital of Hungary in that time – is also a proof of the Armenian presence. In Transylvania, the Armenians obtained permission to settle and various privileges from Duke Mihály Apafi in the 17th century. In the middle of the 19thcentury, we can assume a population of cca. 12-15 thousand who had Armenian identity: language, religion and origin. Two of the 13 generals executed after the Hungarian revolution of 1848-49 were of Armenian origin: Ernő Kiss, and Vilmos Lázár. After the system change in 1989, the Armenian societal, cultural and religious life started to revive in Hungary. 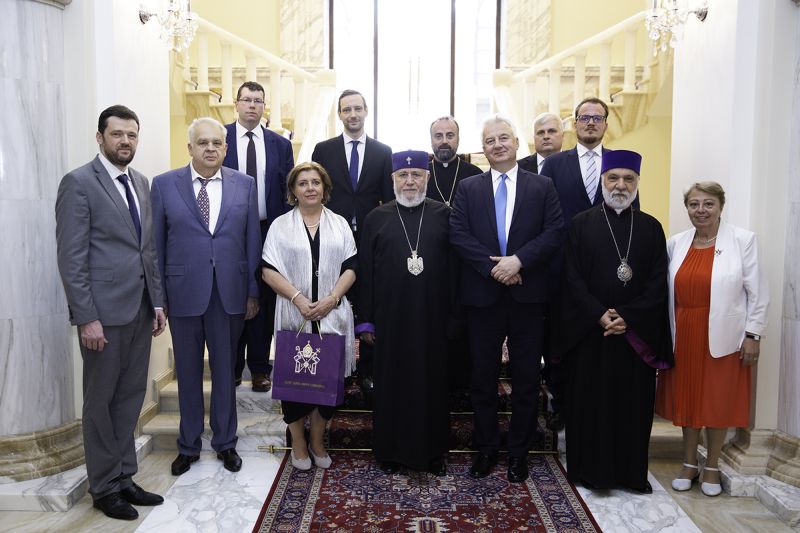 ARMENPRESS: Mr. State Secretary, the well-known events of 2012 resulted in the suspension of the diplomatic relations between Armenia and Hungary, upon which the then Foreign Minister of Hungary expressed sorrow and regret. However, the violent murder of Gurgen Margaryan in 2004 remains a painful issue among the Armenian society. Meanwhile in 2021, we observed the moral gesture of the Government of Hungary mediating for the repatriation of 5 Armenian prisoners of war held in Azerbaijan. Do you think it might be an attempt to open a new page in the relations of Armenia and Hungary?

H.E. Tristan Azbej: Hungarian-Armenian solidarity is based on our common Christian faith, our cultural, religious and educational ties and last but not least on the Armenian diaspora in Hungary and their descendants. This fraternal bond is so strong that it has existed even during the suspension of diplomatic relations; for example, in the form of cooperation between universities and the realization of Armenian cultural events in Hungary. This holds true for the manifestations of human solidarity also. In recent years, through the Hungary Helps Program I’m leading, the Hungarian government has supported the reconstruction of a damaged school of the Armenian Apostolic Church in Syria, the restoration of a church in the Iraqi city of Zakho and has provided help for Armenian Catholic families in Lebanon. In Armenia, we have supported the humanitarian and charity work of the Armenian Apostolic Church and faith-based NGOs. The Armenian community of Budapest is also quite active in keeping their traditions and the religion of their ancestors. A few months ago, in December 2021, His Beatitude Patriarch Raphael Bedros Minassian XXI celebrated Armenian liturgy in the church of the catholic community. The Armenian Faculty at our Péter Pázmány Catholic University is also becoming more and more popular. The Government of Hungary provides all support for our local community in order for them to continue thriving.

Hungarians have always shared the grief of Armenians over the painful event of the murder of Armenian officer Gurgen Margaryan in 2004, but they also feel it is time to open a new page and look towards a more hopeful future.

ARMENPRESS: Mr. Deputy Prime Minister, how important is the normalization of Armenian - Hungarian relations in Hungary, including among the public?

H.E. Dr. Zsolt Semjén: Armenia is the first Christian nation in the world, so it is our brotherly duty to cooperate in all possible fields for a better, more brotherly world. The Hungarian people await with a hopeful heart the re-strengthening of the centuries-long friendship and brotherhood between our nations on the diplomatic level, which in our view has become well-established on scientific, cultural, religious and humanitarian levels in the past year. 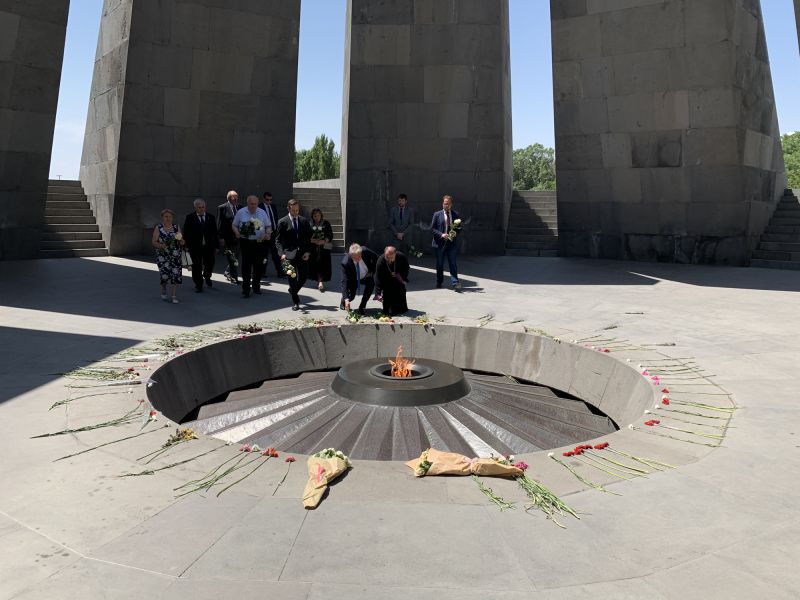 H.E. Dr. Zsolt Semjén: Most recently, the Hungarian government successfully mediated the release of 5 Armenian citizens detained in Azerbaijan. In addition to their release, the Hungarian government also provided Covid-19 vaccines to Armenia. These results represent an active expression of solidarity between the Hungarian people and government and the Armenians. The original bond has not been destroyed during recent years and we are pleased that all this contributes to making the relations between our peoples more complete and to hopefully resume diplomatic relations.

ARMENPRESS: Mr. State Secretary, Hungary is among the few countries in the world that have taken up the mission on a government level to openly speak about the plight of Christians being persecuted around the world because of their belief. Why is this issue so important for Hungary and how are you helping?

H.E. Tristan Azbej: Undoubtedly, the Government of Hungary was the first administration in the world to raise the issue of helping persecuted Christians to government level. The reason for this is the fact that Hungary was one of the first countries to recognize that the persecution of Christians is the most significant - and most concealed – humanitarian crisis of our time: 360 million people worldwide are persecuted and discriminated for being Christian. The objective of the Hungary Helps Program is to provide direct humanitarian assistance on the spot thus making it possible for crisis-hit communities to remain and succeed in their ancestral lands. 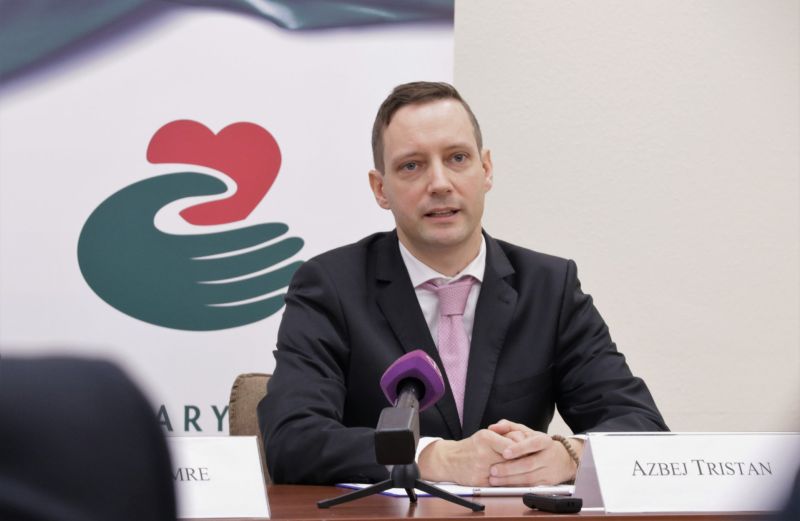 Gurgen Margaryan was asleep in his room when Safarov attacked him with an axe.

During the trial in Hungary, Safarov admitted in court to having killed Margaryan because of his hatred towards Armenia and Armenians. He was sentenced to life in prison by the Hungarian court. However, in 2012 Hungary extradited him to Azerbaijan upon Baku’s request. He was released upon arrival, glorified on the state-level and pardoned by President Aliyev. On the same day, then-President of Armenia Serzh Sargsyan severed diplomatic relations with Hungary.

The pardon and glorification of Safarov in Azerbaijan received widespread condemnation around the world.