It is important for Russia that Armenia feels safe – Ambassador Kopirkin 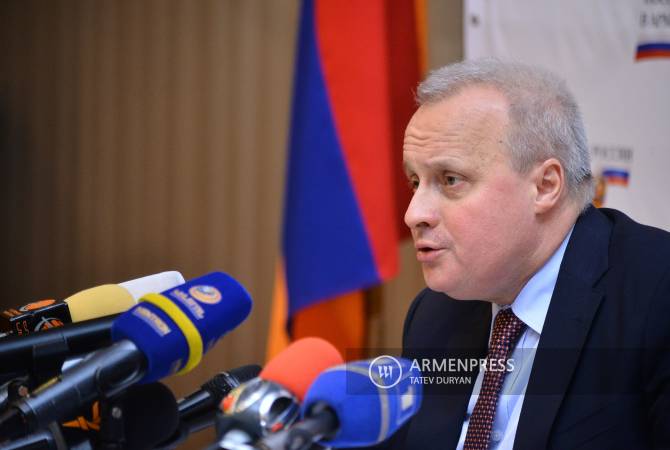 
YEREVAN, 26 FEBRUARY, ARMENPRESS. Russia is not going to occupy Ukraine. The Russian side is interested in having an independent, including independent from foreign governments, prosperous neighbor which will represent the interests of all segments of Ukrainian society, Russian Ambassador to Armenia Sergey Kopirkin said in an exclusive interview with ARMENPRESS.

Touching upon the fear that given the situation around Ukraine, Azerbaijan may use the opportunity to escalate the situation on the Armenian-Azerbaijani border, the Ambassador reminded that Russia values the relations with Armenia. According to him, it is important that the Armenian people feel safe, and the guarantor of that is the Armenian-Russian allied relations.

“You know very well that we value the relations between the two countries, we see them as an important factor for maintaining security and peace in the region. Particulraly because it allows Russia to play a mediating role in resolving existing and emerging issues.

We use this factor in our active efforts to normalize relations between Armenia and Azerbaijan, including the settlement of border issues and the creation of conditions for the peaceful and secure development of the region. Naturally, it is very important that these efforts be strengthened by the political will of both sides, by their willingness to seek mutually acceptable solutions and agreements. We are actively working with Yerevan and Baku on this.

And, of course, it is important for us that Armenia and the Armenian people feel safe. It is guaranteed by our allied relations, the tendency of our countries to deepen and strengthen them”, the Russian Ambassador said.

Answering the question of what impact can the western sanctions and declining Russian currency have on  bilateral economic relations, Ambassador Kopirkin said, “I want to emphasize that Russia does not recognize unilateral sanctions. We consider them illegal, contrary to the spirit and letter of international law, according to which only the UN Security Council can take coercive measures.

At the same time, the leadership of the Russian economic and financial system, soberly assessing the "rage of sanctions" in which many Western politicians are, took timely counter-measures. Stable banks, commercial-financial information exchange systems, active import substitution program. Much has been done over the years since our Western partners first thought that they could force us to relinquish our sovereign right to defend our national interests through sanctions. Let me just remind you that the package of sanctions recently adopted by Washington has become the 101st "post-jubilee". And a lot will be done in this direction.

The developed toolkit is also about the protection of trade and economic relations with our foreign partners, especially with those with whom we are united by common integration mechanisms. By the way, it is symbolic that the new stage of "sanctions rage" coincided with the regular successful session of the Eurasian Intergovernmental Council in Kazakhstan, in which, in particular, the Prime Minister of the Russian Federation Mishustin announced a new integration project, the Eurasian AgroExpress, which aims to simplify and speed up logistics processes in the trade of agricultural products between the member states”, said the Russian Ambassador.