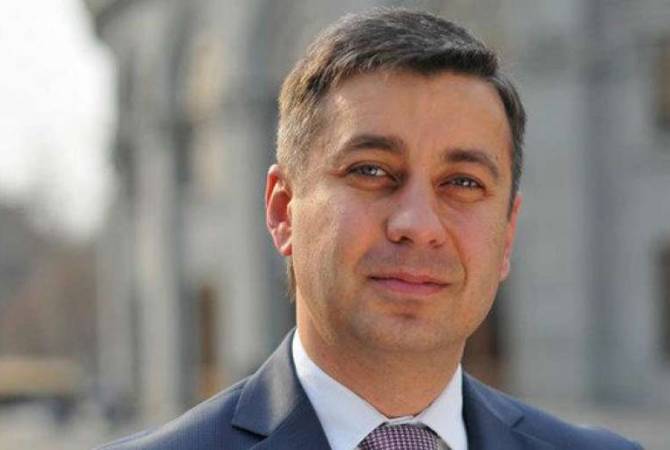 
YEREVAN, MARCH 5, ARMENPRESS. Ambassador of Armenia to Ukraine Vladimir Karapetyan presented details about the ongoing developments in Ukraine, the actions taken and being taken by the Embassy.

In an interview to ARMENPRESS, the Ambassador said currently the military operations continue in different – northern, eastern and southern, parts of Ukraine, including in the outskirts of capital Kiev.

He added that the Embassy staff is in constant, daily touch with the Armenian citizens, provides consulting support about the departure ways and possibilities from Ukraine to Armenia, prepares and provides necessary documents for that purpose.

- How are the developments going on in Ukraine now?

- At the moment the battles continue in different – northern, eastern and southern, parts of Ukraine, including in the outskirts of the capital Kiev. The second round of the Russian-Ukrainian talks was held in Belarus on March 3, as a result of which some promising agreements were reached, particularly relating to the humanitarian corridors for the exit of the civilian population and the temporary ceasefire in that sites. Armenia has expressed its position over this matter and has great hopes that it would be possible to settle issues around a negotiation table.

- We know that before the start of the military operations some embassies in Kiev evacuated firstly the families of their diplomats, and then the diplomats. What policy has Armenia adopted in this regard?

- The diplomatic representation of Armenia in Ukraine has been one of the unique embassies (there are 100 embassies in Kiev), which has been in Kiev with its whole staff from the very start of the military operations and fulfilled its functions. The Embassy has also been in constant touch with the Armenian citizens, ethnic Armenians and local authorities.

Due to the deterioration of the situation around Kiev, according to the decision of the Foreign Minister of Armenia, the Ambassador and the Embassy staff moved to the city of Lviv on March 4 and will temporarily work there for security purposes. A consular point has already opened in Lviv for providing support to the Armenian citizens. Tomorrow another such consular point will open in Uzhhorod.

- What does the Embassy do for assisting the Armenian citizens?

- The Embassy staff is in constant, daily touch with the Armenian citizens, provides consulting support about the ways and opportunities of leaving Ukraine for Armenia, prepares and provides necessary documents for this purpose.

Within its modest opportunities, the Embassy, together with the Armenian community of Ukraine, helped those people who wanted to leave their homes, their cities. It’s important to consider an essential factor: several hundreds of thousands of Armenians live in Ukraine, and most of them are citizens of Armenia. I say this so that you can imagine the overload under which the Embassy has worked in Kiev: constant calls, we answered several thousand calls, dozens of visits of citizens and applications for assistance. No embassy had the volume of workload which we had, given the big size of the community and the number of applications.

And all of these works have been done in the war situation. Two of the Embassy diplomats spent the nights in shelters from the first days of the war, sheltering from the explosions and shootings, and sometimes they communicated with our compatriots from shelter, received calls and gave consulting.

Today as well the Embassy continues its service around the clock, by providing both consulting and also in respective cases certificates of return to Armenia to those citizens who currently do not have a valid Armenian passport for crossing the border of Ukraine. Within its capacities the Embassy is also assisting the Armenian citizens who are in different difficult situations.

I would like to specifically highlight the caring attitude of the Foreign Ministry leadership towards our compatriots facing difficulties. The only direction and goal of all our orders and tasks are our citizens and relate to the measures of providing them with proper assistance.

You are aware also that with the efforts of the Armenian Foreign Ministry, Poland, Slovakia, Romania, Moldova and Hungary have allowed Armenian citizens leaving Ukraine to cross their land border checkpoints without a visa. Moreover, Armenian diplomats are working in the border sections between these countries and Ukraine, assisting our compatriots who need help.

- How many Armenian citizens are there in Ukraine? Is there any support also for Ukrainian-Armenians?

- It’s impossible to mention the exact number because only a small part of the citizens goes through a consular registration which is a voluntary process.

As for Armenians who are citizens of Ukraine, we must note that we receive most of the calls also from the Ukrainian citizens. I want to remind the statement of the Armenian Foreign Ministry that Armenia is ready to host Armenians arriving from Ukraine. We are also ready to provide necessary support to the persons with Ukrainian citizenship who are crossing the Armenian border, regardless