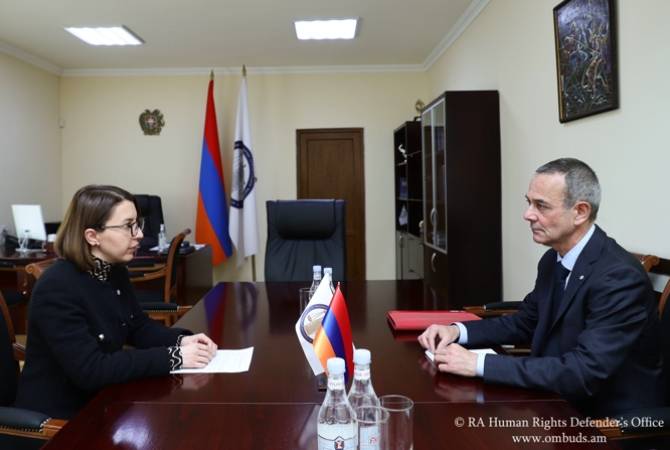 As ARMENPRESS was informed from the press service of the Human Rights Defender’s Office, issues related to the rights of the Armenian servicemen and civilians held captive in Azerbaijan and the return process were discussed at the meeting. In particular, Thierry Ribo referred to the activities related to the Armenian POWs and civilian detainees held in Azerbaijan, including the work carried out before and after the 2020 war on missing persons.

The head of the ICRC delegation also presented the programs implemented in Artsakh within the framework of the ICRC mandate after the 44-day war.

The Human Rights Defender of Armenia presented to the head of the delegation the facts and conclusions of her visit to Artsakh last week. The Ombudsman noted that the provocations of the Azerbaijani armed forces aimed at disrupting the normal life of the population of villages near the line of contact or near Azerbaijani positions are particularly concerning, citing the events in Khramort and Norshen.

According to the Human Rights Defender, this is the result of an ongoing, organized policy guided from one center. Proof of such a policy is the trials of two Armenian prisoners of war, Ishkhan Sargsyan and Vladimir Rafaelyan, who were sentenced to 19 and 18 years in prison, respectively. The Ombudsman noted that these are trumped up trials, which is a gross violation of the Geneva Convention.

At the end of the meeting, the parties praised the role of the cooperation between the ICRC delegation in Armenia and the Human Rights Defender’s Offic of Armenia in the protection of human rights and humanitarian rights, reaffirming their readiness to cooperate.