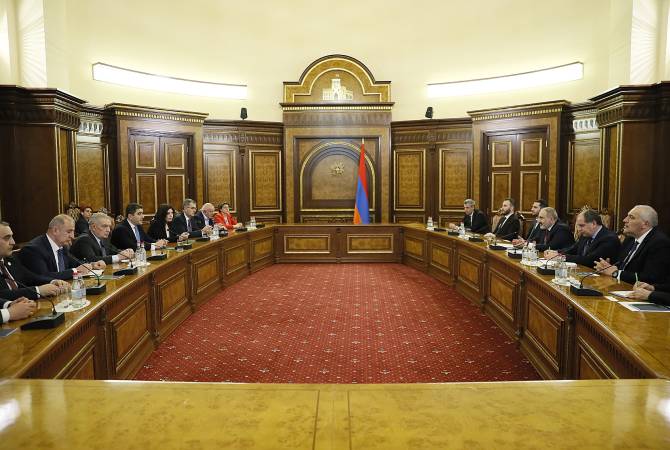 
YEREVAN< APRIL 5, ARMENPRESS. Prime Minister Nikol Pashinyan received the delegation led by the Speaker of the Georgian Parliament Shalva Papuashvili, who is in Armenia on a two-day official visit, ARMENPRESS was informed from the Office of the Prime Minister.

Greeting the guests, the Prime Minister said, “I think that the Armenian-Georgian relations are in a unique period, we can see new dynamics, new mood, new perspectives at the political level. It is obvious that there is a mutual desire for closer cooperation between the governments and parliaments of our countries, which, I am convinced, stems from the desire for closer cooperation and partnership between our peoples. And I hope that with the high-level and intensive political relations we will be able to express that desire in an institutional way in the relations between our two countries. Once again welcome, I am very happy for this meeting."

Shalva Papuashvili thanked for the warm reception and said, “I want to express my deep respect for you and the Armenian people, who follow you in such a spirit. As you mentioned, today the Armenian-Georgian relations are very close. It is especially visible at the level of the Prime Ministers. And with this visit I want to reaffirm once again that there are such close relations between both the Prime Ministers and the Presidents of parliaments. We discussed and talked about the fact that these meetings, these relations should be not only official, but also at the level of friendship groups, commissions and staffs. And we also talked about that today, when the region is facing such challenges, we should be able to do everything to build lasting peace in the region."

Shalva Papuashvili added that this year Armenia and Georgia mark the 30th anniversary of the establishment of diplomatic relations, which is a good opportunity to re-evaluate the friendship and the centuries-old shared history of the two countries.

During the meeting the interlocutors referred to the further development of the Armenian-Georgian relations, the processes taking place in the South Caucasus, as well as in the international arena.