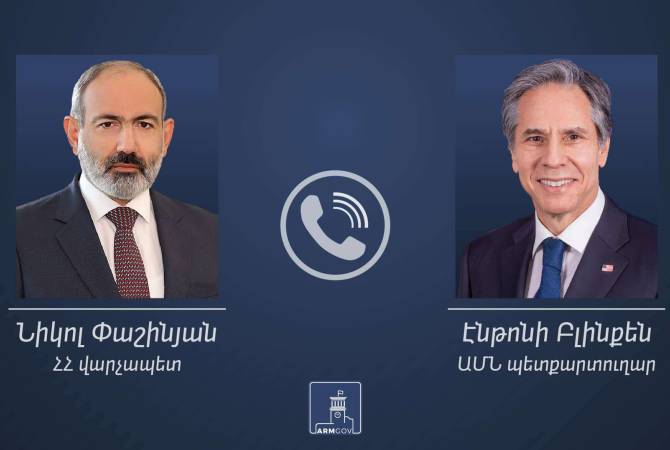 
YEREVAN, APRIL 5, ARMENPRESS. Prime Minister Nikol Pashinyan had a telephone conversation with US Secretary of State Antony Blinken, ARMENORESS was infomred from the Offic eof the Prime Minister.

The interlocutors touched upon the issues on the agenda of the Armenian-US relations, highlighted the further development and strengthening of bilateral cooperation in various spheres. The Prime Minister thanked the American side for its support to Armenia in the direction of democratic reforms, noting that the further strengthening of democracy is the policy adopted by the Armenian Government.

Nikol Pashinyan and Antony Blinken referred to the processes taking place in the South Caucasus, the increasing tensions over Nagorno Karabakh. Nikol Pashinyan presented the situation in Artsakh caused by the actions of the Azerbaijani units, the humanitarian issues and attached importance to the addressed reaction of the United States.

The parties stressed the importance of ensuring stability and peace in the region, emphasizing the importance of the OSCE Minsk Group Co-chairs’ format. The sides also referred to the trilateral meeting to be held in Brussels on April 6.

The Prime Minister of the Republic of Armenia and the US Secretary of State exchanged views on the demarcation and delimitation of border between Armenia and Azerbaijan, the possibility of unblocking communications in the region, as well as the ongoing dialogue between Armenia and Turkey.

The sides also referred to the processes taking place in the international arena, including the situation in Ukraine.