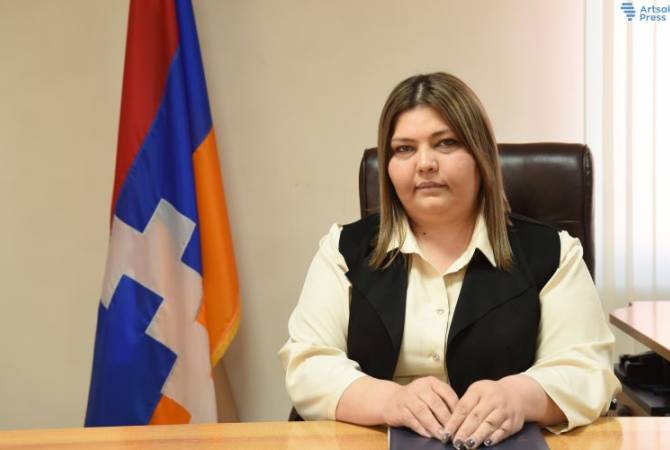 
STEPANAKERT, APRIL 8, ARMENPRESS. 46,000 people were displaced in the 2020 war in Artsakh, and over 25,628 of them have returned. Housing and employment are the top issues for them and the Artsakh Ministry of Social Development and Migration is working to resolve the problems.

In an interview to ARMENPRESS, the Minister of Social Development and Migration of Artsakh Armine Petrosyan said that immediately after the war they began the implementation of a number of assistance programs to mitigate the social issues of the forcefully displaced citizens.

“Thanks to the programs implemented both with our own means as well as jointly with the Government of Armenia, we can say that right now we have succeeded in mitigating the social crisis and creating maximally favorable living conditions for our population. These were mostly short-term social support programs and currently we aim at replacing them with the kind of programs that would ensure employment opportunities,” Petrosyan said.

The Artsakh authorities are also working on the housing issues, as well the issue of giving a legal status to the internally displaced persons.

“We’ve developed new approaches for solving social issues aimed at creating jobs, developing SMEs and providing support to farmers. For this purpose we’ve opened a foundation under the ministry, the function of which is to cooperate with philanthropists and investors to encourage the opening of SMEs in Artsakh and assist farmers,” she added.

In addition to the implemented various programs, the Artsakh authorities plan to substitute the assistance programs with development programs in 2022.

“We are planning to organize vocational training programs for displaced people and other social groups, provision of social assistance to unemployed displaced people to start small entrepreneurships in villages, as well as the implementation of self-employment and employment through the donations from private philanthropists and charitable organizations within the framework of the ministry’s Social Development Programs Foundation,” the minister added.

The Artsakh authorities also launched a Social-Psychological Center which will research all social needs of citizens and act as a bridge between the society and the ministry. The first office of the center was opened in Martuni. Gradually it will expand to Stepanakert, Askeran and Martakert.

Minister of Social Development and Migration of Artsakh Armine Petrosyan said that 46,000 citizens were displaced in the war, and 25,628 of them have returned to Artsakh so far.

Asked what job opportunities exist for the displaced persons, Petrosyan said the available jobs are mostly in the private sector: construction and services.