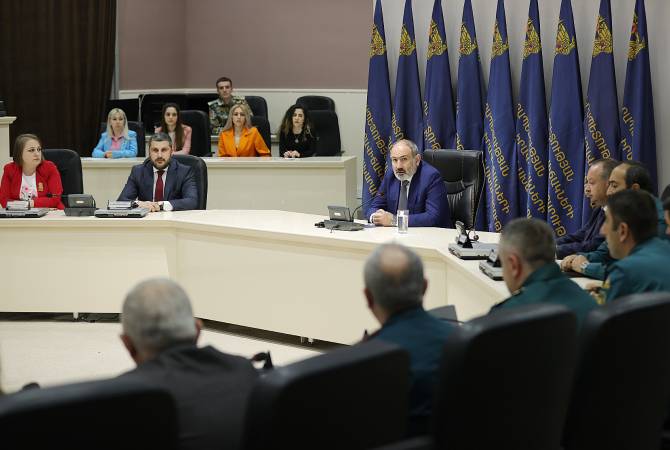 
YEREVAN, APRIL 12, ARMENPRESS. Prime Minister of Armenia Nikol Pashinyan introduced the newly appointed Minister Armen Pambukhchyan to the staff of the Ministry of Emergency Situations, ARMENPRESS was informed from the Office of the Prime Minister.

The Prime Minister wished success to Mr. Pambukhchyan in his important work and expressed hope that during his tenure the efficiency of the Ministry of Emergency Situations will increase.

"Usually, on similar occasions, we appoint a new minister, see off the old minister, thank him for the work done. You know that in this case we have a slightly different, unusual or even unprecedented situation. And I have to tell you honestly and sincerely that I am very sorry for such a development. Personally for me what happened is very painful in terms of both morality and politics. You know that after the 44-day war, I offered Mr. Piloyan the post of Minister of Emergency Situations, I entrusted that post, and we worked during this period in an atmosphere of mutual respect. But I think we must clearly state that finally the rule of law in the Republic of Armenia should not be just words, equality before the law should not be just words, after all, it’s the case now and was that before these events. I hope that we all understand this message very clearly and directly”, the Prime Minister said.

According to Nikol Pashinyan, it is clear that nowhere in the Republic of Armenia there is a very high level of welfare. "Moreover, we are a country that has problems with poverty, social problems, and serious security challenges in general. We must understand that each of us is required to make great efforts, and yes, to go through great deprivations in order to be able to solve the challenges facing our country, to solve the problems in the public administration system, to increase its efficiency, and finally make our service to the people more and more effective. I think this should be today’s main message.

Mr. Pambukhchyan, I wish good luck to you and the entire staff of the Ministry. And I want to say that talking about the rule of law, let's not forget about the presumption of innocence, because according to the legislation of the Republic of Armenia, any person is innocent until his guilt is confirmed by a verdict that has entered into force. Let’s be guided by this presumption," Nikol Pashinyan said.

Armen Pambukhchyan thanked the Prime Minister for the great confidence and assured that he will spare no effort and energy to justify the expectations of the PM and the society. "I am not new to this ministry, I am fully aware of all the tasks and priorities. I would like to note that during my tenure I will be guided by the agenda and values adopted by the Government and the political team," the newly appointed Minister of Emergency Situations said.