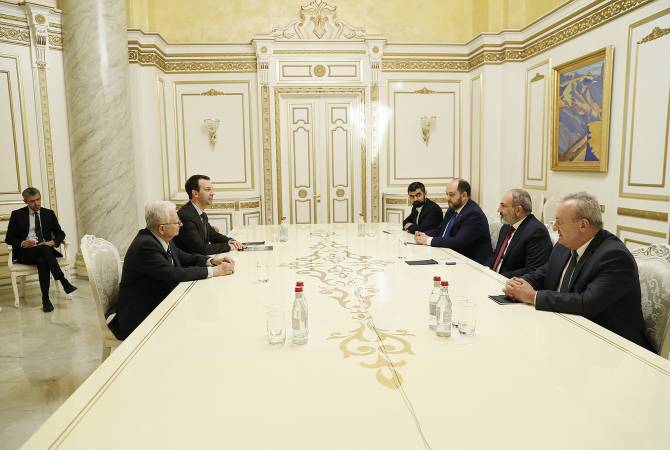 The Prime Minister welcomed their visit to Armenia, noting that the Joint Institute for Nuclear Research, of which the Science Committee of Armenia is a member, is a good platform for developing international cooperation, including with the partners of the Russian Federation. Nikol Pashinyan stressed that the Armenian Government is ready to support the further development of bilateral cooperation and the implementation of joint programs in the field of science.

Addressing Yuri Hovhannisyan, the Prime Minister noted. "I am glad that you maintain persistent contact with Armenia and the local partners, you have new ideas, you successfully continue your scientific activity”. The Prime Minister wished the prominent scientist good health.

Yuri Hovhannisyan and Grigory Trubnikov presented the details of the visit to Armenia and the steps aimed at the implementation of new programs in the field of science, in particular, establishment of new scientific centers at the YSU and other higher educational institutions in Yerevan. Yuri Hovhannisyan expressed confidence that our country has good opportunities in the field of science, adding that he will continue to contribute to the progress of the field with his experience.

Issues related to the involvement of young scientists in new programs within the framework of the Joint Institute for Nuclear Research were discussed at the meeting.