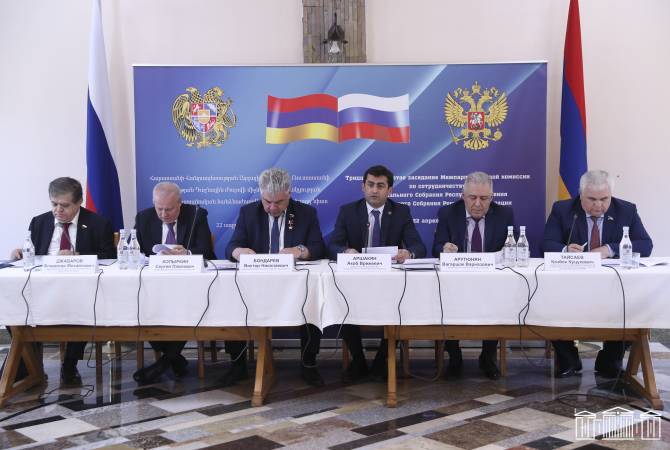 
YEREVAN, APRIL 22, ARMENPRESS. The regular sitting of the Interparliamentary Commission on Cooperation between the National Assembly of the Republic of Armenia and the Federation Council of the Russian Federation was dedicated to the 30th anniversary of the establishment of diplomatic relations between Armenia and Russia, as well as the 25th anniversary of the Treaty on Friendship, Cooperation and Mutual Assistance. The Armenian and Russian parliamentarians held the 34th sitting of the commission on April 22 in Stepanavan.

As ARMENPRESS was informed from the press service of the parliament of Armenia, the Chairman of the Defense and Security Committee of the Federation Council of the Russian Federation Viktor Bondarev praised the cooperation between the two countries, emphasizing that Armenia is a strategic ally of Russia. He stressed the importance of establishing stability in the region, noting that one of Russia's priorities is the peaceful settlement of the situation in Nagorno Karabakh.

The Vice President of the Natoinal Assembly of Armenia, Co-Chair of the Armenian-Russian Commission on Interparliamentary Cooperation Hakob Arshakyan, in his turn, highlighted the role of Russian peacekeepers in maintaining peace in Nagorno Karabakh.

Chairman of the Defense and Security Committee of the Federation Council of the Russian Federation Viktor Bondarev thanked the Armenian side and personally Hakob Arshakyan for organizing the sitting at a high level and for the warm reception.

According to Hakob Arshakyan, the results of the sitting were satisfactory, the discussions were held in a constructive atmosphere. According to him, a clear agreement has been reached to expand cooperation and implement programs in various fields.