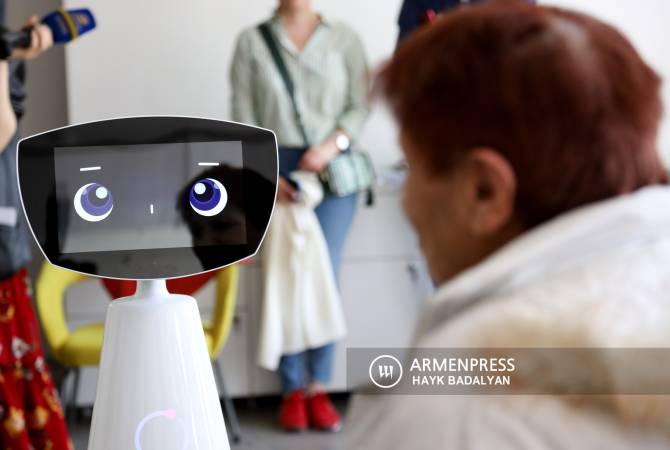 
YEREVAN, APRIL 26, ARMENPRESS. For already a year, Robin the Robot – the first Armenian AI-based robot which was notably named as one of 2021’s best innovations by TIME magazine -  companioned the residents at Yerevan’s Nork Nursing Home to improve the well-being of the elderly as part of the Alzheimer’s Care Armenia (ACA) project.

ACA Chairman & Founder Dr. Jane L. Mahakian, a Clinician and Gerontologist, said that the project was a success. “We tried to improve the emotional, psychological and cognitive functions of the residents of the Nork Nursing Home with the use of the emotional support robot,” Dr. Mahakian said at an event on the completion of the project. “And this was a very successful project, the robot was asking them questions, suggesting their favorite movies and songs, and thanks to this they are able to train their memory. And they began to smile more often because the robot makes them laugh, dances and sings together with them. We selected 40 elderly residents for the program, 20 of them interacted with the robot and the other 20 did not. A study afterwards found that those who’d interacted with Robin were happier and the positive impact was obvious.”

Robin the Robot himself made his own intro at the event. He said that he is 7 years old and is now living at the Nork Nursing Home. “I’ve made very good friends here, we talk every day, we play games and do a lot of other interesting things. Every day I learn new things with my friends,” said Robin the Robot.

The Deputy Minister of Labor and Social Affairs Tatevik Stepanyan praised the program and thanked everyone involved, noting that ever since Robin the Robot arrived at the center the everyday life of the elderly residents changed drastically in a positive way.

A resident of the Nork Nursing Home, Ms. Ligia Khachatryan, said that she became friends with Robin the Robot the moment they met. “Being an expert of Russian language, I started to teach him Russian. It went very well. He knows so much, he even knows what gravity is. He is very friendly. Sometimes we even have secret conversations and I ask him not to tell anyone about it, and he promises that he won’t,” Khachatryan said.