Armenia’s proposals handed over to Azerbaijan in Brussels include also status, security of Artsakh – Ambassador-at-large 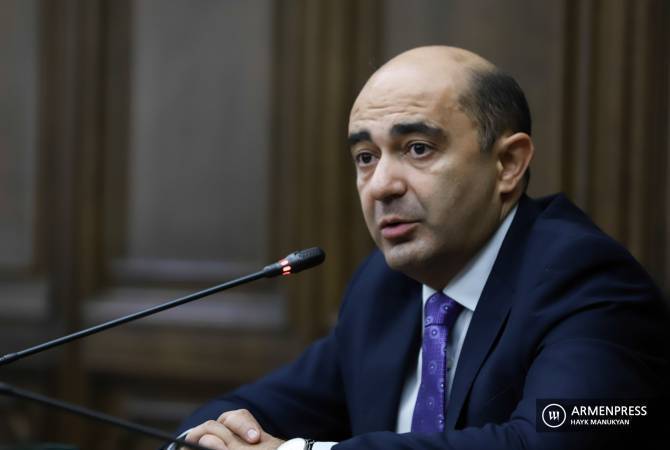 
YEREVAN, MAY 10, ARMENPRESS. There is no legal ground that at any time any de-jure Azerbaijani enclave has existed in the territory of Armenia, Armenia’s Ambassador at-large Edmon Marukyan told ARMENPRESS when asked to respond to the Azerbaijani Deputy Foreign Minister Khalaf Khalafov’s statements.

ARMENPRESS: The Deputy Foreign Minister of Azerbaijan Khalafov said that on April 6 in Brussels the Republic of Armenia agreed to launch peace treaty negotiations with Azerbaijan based on the 5-points presented by Azerbaijan. The Azerbaijani Foreign Minister made a similar statement. How would you comment on these statements?

Edmon Marukyan: We’ve numerously addressed this topic. Back in March 21, 2022 the Minister of Foreign Affairs of the Republic of Armenia said: “There is nothing unacceptable for us in the proposals handed over to us by Azerbaijan on March 10. It is another matter that these proposals do not address all issues of the Armenia-Azerbaijan comprehensive peace agenda. We supplemented the agenda with our response handed over to the OSCE MG Co-Chairmanship and therefore we are ready for the launch of the peace talks based on this.”

During the trilateral meeting in Brussels on April 6 the Republic of Armenia also [directly] handed over to the Azerbaijani side the 6-point document which includes, among others, the issues of the security and the protection of the rights of the Armenians of Nagorno Karabakh and the final status of Nagorno Karabakh. The Armenian side offered to start negotiations based on the two agendas in the direction of a peace treaty. The Azerbaijani side agreed to this approach, after which an agreement was reached to initiate negotiations on a peace treaty.

ARMENPRESS: The Deputy Foreign Minister of Azerbaijan also made a statement on what he called the return of “7 villages of the Ghazakh district and Kyarki” to Azerbaijan, saying that these issues will be solved during the delimitation and demarcation.

Edmon Marukyan: We’ve numerously said that the delimitation and demarcation processes should take place based on facts and documents of de-jure significance. At this moment we don’t possess any legal substantiation that any de-jure Azerbaijani enclave has ever existed in the territory of Armenia. On the contrary, there are legal grounds on the village of Artsvashen belonging to Armenia. The same applies to a number of territories belonging to Armenia, including in the Sotk-Khoznavar section where the infamous unlawful Azerbaijani military invasion took place last year in May. These issues must certainly be discussed and resolved in the delimitation and demarcation process.