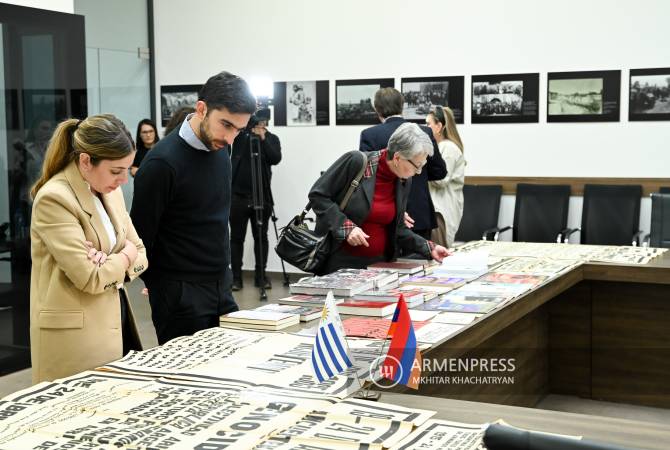 "After the recognition of the Armenian Genocide by Uruguay, a number of major countries in the world followed the big step of this small state by recognizing the genocide. And all these materials passed to us today by the Armenian community of Uruguay are of great importance for our museum,” said the museum director.

The Ambassador of Uruguay to Armenia Eduardo Rosenbrock noted that he is glad to transfer any materials on behalf of the Armenian Diaspora of Uruguay to the museum.

"Uruguay is a small country, but it has a large Armenian community, which is very active and has been able to integrate well into Uruguayan society. This year is very important for Armenia and Uruguay, as May 27 marks the 30th anniversary of the establishment of diplomatic relations between the two countries. The publications, books and leaflets provided by the Armenian community of Uruguay, which are here today, are very important works that will enrich the National Library of Armenia and the Armenian Genocide Museum," the Ambassador said.

Historian Gevorg Yazichyan, who initiated the process of transporting the materials published in Uruguay to Armenia, said that the books, leaflets were mainly related to Armenian history, the Armenian issues, the Armenian Cause and the Armenian Genocide. There are posters that were published in Argentina, most of them on the 50th anniversary of the Genocide.