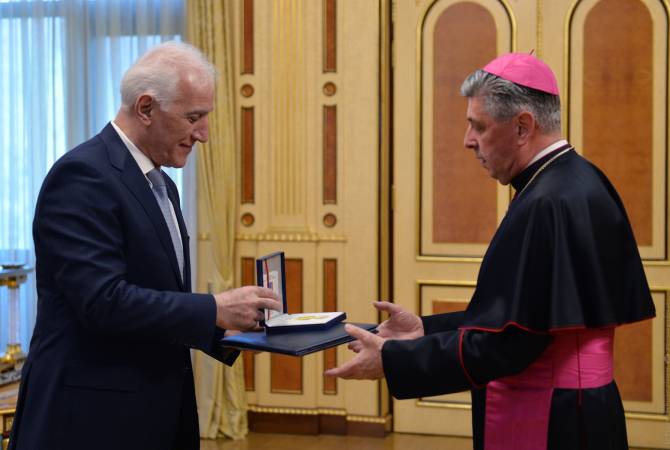 
YEREVAN, MAY 17, ARMENPRESS. By the decree of the President of the Republic, the Apostolic Nuncio of the Holy See to Armenia, Archbishop José Avelino Betancourt, was awarded the Medal of Gratitude for his significant contribution to the establishment, strengthening, development of friendly relations with the Republic of Armenia and protection of universal values.

As ARMENPRESS was informed from the press service of the President’s Office, the President handed over the award to José Avelino Betancourt on May 17.

Vahagn Khachaturyan noted that he is very pleased to hand over the state award of the Republic of Armenia, which best reflects the significant contribution of José Avelino Betancourt to the strengthening and development of friendly relations between Armenia and the Holy See. "I am convinced that there will be no obstacle to the further development of the relations between the Holy See and Armenia, as it is guaranteed at the highest level with the participation of people like you," said President Khachaturyan, congratulating the Holy See's Apostolic Nuncio to Armenia.

José Avelino Betancourt thanked for the appreciation, noting that it is a great honor for him to receive such an award from the president of the first Christian country in the world.