From Ashtarak to Yerevan, then to Milan and Basel, chasing the childhood dream of becoming a scientist | ARMENPRESS Armenian News Agency

From Ashtarak to Yerevan, then to Milan and Basel, chasing the childhood dream of becoming a scientist 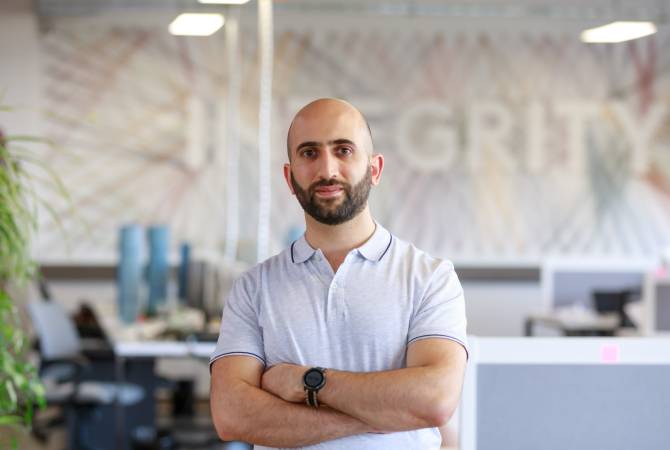 
YEREVAN, MAY 18, ARMENPRESS. Smbat Gevorgyan, born in the town of Ashtarak, studied at the Shirakatsy Lyceum, Yerevan, in the 9th and 10th grades, then entered the Faculty of Biology at Yerevan State University and specialized in the realm of genetics. Smbat holds a postgraduate degree in medical nanotechnology from Milan University, where he worked on the creation of nanoparticles intended for the treatment of various diseases. Afterwards, he left for Basel, Switzerland, and worked professionally as a postdoctoral researcher. Smbat was back to his homeland to work for the Foundation for Armenian Science and Technology (FAST). Currently, he is involved in the ASCENT (Advanced Solutions Center) program by FAST, aiming at the commercialization of innovative scientific solutions in bioscience.

Could you please elaborate on your current activity?

The major criticism toward science is that its outcomes are hardly ever palpable, while scientists are blamed for far too abstract research. This issue is particularly acute in Armenia- why should the state fund science provided there is no visible result. Successful instances of commercialization of scientific output generate interest in scientists’ work. It goes without saying that commercialization is not the core aim of science, it is rather a side effect, though this is what makes scientific results palpable. That’s because science creates new knowledge, non-existent before, thus enabling to not merely set the bar higher, but also to establish a new one. It is worth noting that science-based startups are quite perspective, even though they involve high risks, they are justified as the results are multiple times as big.

One of the most eminent instances of scientific commercialization is a generation of various inventions by the inventor and engineer Thomas Edison, which turned into a particular product or technology, transforming people’s life. Another illustration is our compatriot Noubar Afeyan’s activity, who is a scientist as well. He has founded the venture capital company Flagship Pioneering which is behind hundreds of accomplished companies it has incubated. One of such portfolio companies is Moderna which obviously changes people’s life for the better.

Occasionally, scientists immerse themselves in academic science and have no idea about how they need to conduct market research, work out marketing strategies, turn research results into a particular product. This is what frequently holds plenty of scientists back from a career of an accomplished businessperson, whereas Flagship Pioneering is there to resolve this issue through commercialization of competitive scientific ideas. We intended to adhere to this same model in the framework of the ASCENT program, by creating and incubating science-based startups from scratch, at all stages of gaining market share and promotion of the product.

How did your scientific career path commence? Why did you opt for this particular profession and decide to continue with postgraduate studies?

As far as I can recall, I’ve always been eager to become a scientist. I took an interest in natural phenomena and tried to sort out their causes in early childhood. I was fond of all the school subjects linked with natural sciences and had the best results at school olympiads in biology. In particular, in the 9th grade, I came first in the republican Olympiad, which made my family members believe I could make a good doctor. If I had wanted to, I could have received a full scholarship to study at Medical University, but I wasn’t into that, I wanted to do science instead. I had to struggle with my family for a while to be able to pursue my career path. There are no scientists in my family, though education has always been a priority.

Back in 2012, when I came to realize I needed to continue with my postgraduate studies, Armenia didn’t provide all the favourable conditions necessary for complete scientific activity. Besides, international expertise is beneficial at all times- a foreign country, a different work culture, new people, new network. Both work conditions and my passion for self-perfection pushed me to leave for Europe for my postgraduate studies. In addition, the field of medical nanotechnology, which I was keen on, is not at its best in Armenia, we lack a specialized scientific school to date.

Which experience of foreign educational model do you think needs to be assimilated?

As for theoretical knowledge, in case Armenian students are able to cover professional literature in English, it won’t make a huge difference. As regards experimental, and laboratory work, we lag well behind, the gap was especially evident ten years ago when I left to study overseas. We were unable to put coursebook knowledge into practice through lab experiments. Thus, our knowledge was highly flawed. In Italy, I was taken aback by their university laboratories equipped with the latest cutting-edge equipment. Most of it cost thousands of dollars and I got the chance to work with them. The situation has been gradually improving in our country as well, some laboratories are getting similarly well-equipped. The university I wrote my postgraduate dissertation had no shortage in either materials or equipment, the conditions were highly favourable for creative work. On top of that, salaries were so high that it was sufficient for solely focusing on science, that is, there was no need for an additional part-time job.

How did you envision a scientist before becoming one?

Scientists seemed to be the smartest people to me, for that reason the social stereotype of scientists as pitiful and helpless people who are poorly paid and burden on social services, has always sounded weird to me. Now, as I deal with people of diverse occupations, I can see smart people can be found in all professions but not all of them do science. There are, in fact, not that smart scientists as well though (laughs), but most are smart indeed. Scientific activity is creative, no boundaries, there’s the freedom to explore anything that interests scientists themselves and other people.

What’s the discovery that impressed you the most within the scope of your scientific interests?

Overall, I keep track of advancements in all scientific branches. For instance, a couple of years ago I was immensely impressed by the discovery of gravitational waves. It evidenced Albert Einstein’s theory of relativity, according to which time and space are intertwined and massive space objects, while moving with extreme accelerations, cause gravitational waves in the curvature of spacetime, moving at light speed. Moreover, scientists managed to detect gravitational waves which were caused by the mergence of black holes, orbiting around each other in enormous distances (a place in spacetime where nothing escapes its gravity, even the light, thus it is called a black hole).

As regards my field, the discovery, that also inspired me to opt for medical nanotechnology, is nanorobotics. Nano length is a billion times as small as a meter, that is, a nanometer is one-billionth of a meter. We deal with nanoparticles, which are several nanometers wide in diameter. Namely, they are particles a hundred thousand times as small as a millimetre which we can manipulate, select a size and shape, and place functional groups on the surface and medicine inside. Nanorobots can be implanted into the organism and selectively kill cells targeted by us, with no harm to others. Possibilities are indeed limitless, akin to science fiction. As a result of my research, I got nanoparticles which could reach the brain and target tumours in it. Those are medicine injected into the blood or taken as a pill, so that they can reach the programmed spot by travelling in the bloodstream.

Would you mention any scientists who are role models and whose work has been a guideline for you?

There are plenty of talented scientists but I would highlight Marie Curie. He was the first scientist who was awarded the Nobel Prize in two diverse scientific fields, physics (1903) and chemistry (1911). And she has been the only one so far. Given the fact that women didn’t use to have the same status as men a century ago, it was much more complicated for the former to achieve results in science. Besides, she was also an immigrant, a fact that amplifies her accomplishment even further.

How does a day in a scientist’s life start and end?

At present, I am mostly engaged in program coordination, but in case we consider a typical scenario, the scientist comes to the laboratory, reads scientific articles and publications, gets inspired by novel ideas to carry out experiments. Afterwards, he or she thoroughly plans the experiment with a pen and paper or over the computer, carries it out, analyzes the outcomes which make history, provided they are satisfactory, and later come out as a scientific article.

Scientists might also fail. How do they overcome failures?

In fact, there is much uncertainty in scientific work- you try to discover the new but never know whether that will work. While outlining the experiment, you hope to succeed, though there’s a good chance you’ll never get the anticipated result. An experiment running for weeks might turn out to be futile, which is devastating indeed. For that reason, scientists need their colleagues’ and family’s backup not to give up, to carry on persistently and keep refining their results.

What would you tell a child who wants to become a scientist?

I would definitely encourage them to do science if they do want to explore the reasons underlying various phenomena, to try to figure out why the world is the way it is. Each profession has its merits and demerits but I find the advantages of doing science more prevalent. Those are the international nature of science, creative work, being ahead of time, when you are aware of incredible achievements that will benefit humankind before long, whilst they are still unknown to the public.

What would you consider to be your career peak?

Each scientist would mention the Nobel Prize as a career peak. Very few scientists achieve it, therefore, to a degree, it is a dream rather than an aim. If you are a talented scientist who gets decent scientific results, luck needs to be taken into consideration as well as it plays a crucial role in order to be in the right place at the right time.

Previous interviews of the "10 questions to a scientist" series are below:

Any beneficial discovery for the sake of humankind would be regarded as a career peak for me. Ella Minasyan

I decided to carry on with the family tradition of pursuing science. Karen Trchunyan

Nothing brings as much joy to a person as the feeling of the reward of a scientific result. Ani Paloyan

The story of Anoxybacillus karvacharensis found in the geothermal spring of Artsakh as a source of inspiration. Diana Ghevondyan

In an American lab 20 years ago I felt like in a Hollywood movie. Anna Poladyan

Science excelled all jobs because it is perspective: Sargis Aghayan

The easiest way to change the world is to do science: Sona Hunanyan