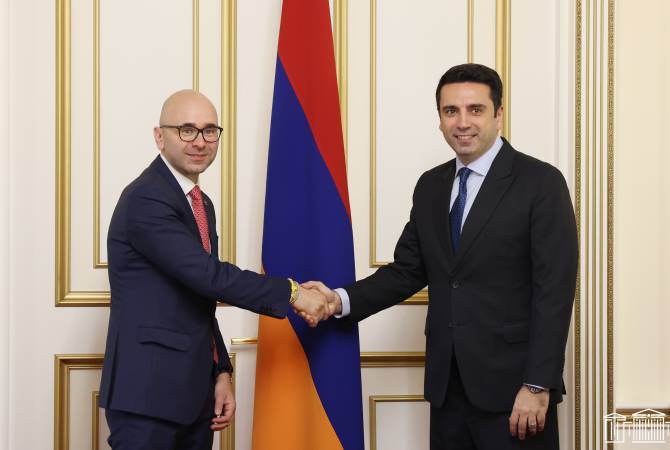 
YEREVAN, MAY 19, ARMENPRESS. On May 19, Speaker of Parliament of Armenia Alen Simonyan received the delegation led by Member of the Chamber of Deputies of the Parliament of Italy, the Head of the Section of Italy-Armenia Relations functioning within the framework of the Inter-Parliamentary Union Giulio Centemero, the Parliament’s press service said.

At the meeting the further activation of the Armenian-Italian interaction, the parliamentary diplomacy was highlighted, especially distinguishing the role of the Friendship Groups. The Speaker of Parliament has noted that Armenia-Italy Friendship Group is traditionally one of the largest functioning in the National Assembly, and he is happy that in the Italian Parliament, besides the Friendship Group with Armenia, within the framework of the Inter-Parliamentary Union the section of Italy-Armenia friendship bilateral relations functions. Alen Simonyan expressed his gratitude for the numerous statements and appeals condemning the 44-day war in 2020 and the Azeri-Turkish aggression against Artsakh before that. He especially singled out the resolution adopted by the Chamber of Deputies of Italy on March 2, 2021, which calls on Azerbaijan to release Armenian prisoners of war.

At the end of the meeting Alen Simonyan conveyed his warm greetings to the President of the Chamber of Deputies of Italy Roberto Fico, expressing hope that his planned visit to Armenia will take place, and the Armenian-Italian inter-parliamentary relations will continue developing.