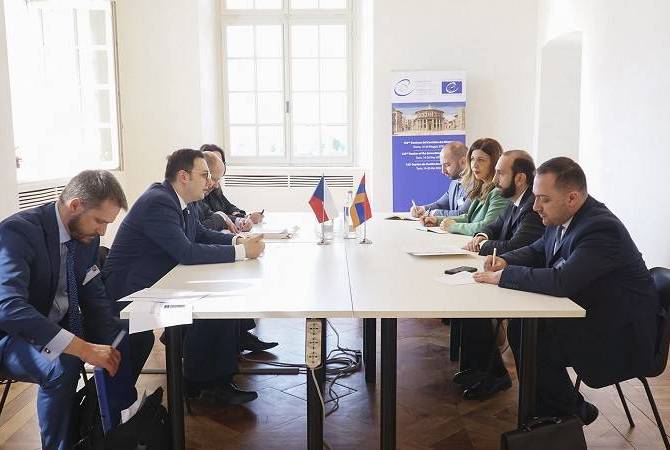 
YEREVAN, MAY 20, ARMENPRESS. On May 20, Foreign Minister of Armenia Ararat Mirzoyan, who is in Turin on a working visit to participate in the 132nd session of the CoE Committee of Foreign Ministers, met with Czech Foreign Minister Jan Lipavsky, the Armenian foreign ministry said.

The sides stressed the importance of expanding and deepening the bilateral relations, highlighting the need for promotion of political dialogue, regular consultations between the Foreign Ministries of the two countries on issues of mutual interest.

The Armenian side highly appreciated the support of Czech Republic to the promotion of democratic reforms in Armenia and strengthening capacities of civil society.

In this context, emphasizing the forthcoming Czech Presidency of the EU, Minister Mirzoyan stressed the interest of the Armenian side in the issue of continuous expansion and strengthening of the Armenia-EU partnership. Reference was also made to the cooperation within the framework of the Eastern Partnership.

During the meeting the interlocutors exchanged views on issues of regional and international importance.

Minister Mirzoyan presented to his counterpart Armenia's position on the processes aimed at establishing regional peace and stability. The mediating role of the OSCE Minsk Group Co-Chairmanship in promoting the peace process of the Nagorno-Karabakh conflict was emphasized.

Touching upon the consequences of the 44-day war, specially the resulting humanitarian issues, Foreign Minister of Armenia particularly stressed the need for repatriation of Armenian prisoners of war and others detained.