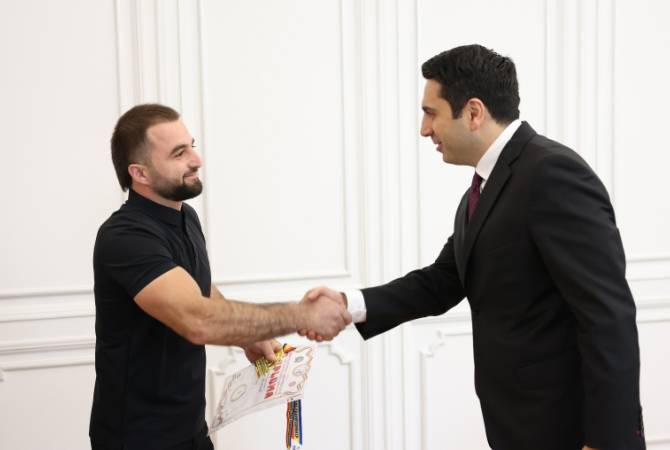 Congratulating Ashot Adamyan for not giving up anybody the champion title for many years, Alen Simonyan was interested in the athlete’s last European Arm Wrestling Championship held in Bucharest on May 14, when the episode of standing of the Azerbaijani athlete, who was the third, on his feet, trying to appear tall and cast shadow the winner of the European Championship Ashot Adamyan.

The Master of Sports informed the Speaker that at that moment he did not notice that athlete’s behavior being obsessed with our hymn and victory. As Ashot has presented, during the competition the Turkish and the Azerbaijani competitors tried to put psychological pressure on him, but they did not succeed deviating him, as the Champion noticed jokingly that he simply did not understand the competitors’ language. The athlete also noted that during his sport career he competed in 60-kg category, and it was for the first time when he competed in 65-kg weight. To Simonyan’s remark whether this is final weight, the young athlete answered that everything is ahead, adding with smile that he did not want to gain weight.

Alen Simonyan was interested in the perspectives of the sport, once again congratulating Ashot Adamyan for registering significant success and handed him a souvenir.