Now the negotiations are about the format and parameters of starting negotiations. Pashinyan | ARMENPRESS Armenian News Agency

Now the negotiations are about the format and parameters of starting negotiations. Pashinyan 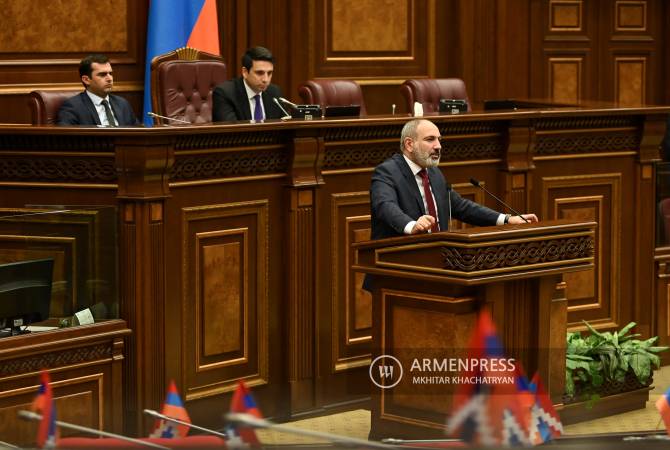 
YEREVAN, MAY 25, ARMENPRES. Prime Minister of Armenia Nikol Pashinyan attaches great importance to Artsakh's position on the issue of whether the agenda of normalization of relations between Armenia and Azerbaijan should be separated from the agenda of settlement of the Nagorno-Karabakh conflict, or whether the normalization of relations should also resolve the Nagorno-Karabakh conflict. Discussions are underway in Armenia to form a position on this issue, and at the moment negotiations are underway only on the format and parameters of starting negotiations, ARMENPRESS reports Pashinyan said at the parliament-Cabinet Q&A session.

Sargis Khandanyan, a member of the Civil Contract faction, reminded that the statement issued by the President of the European Council after the trilateral meeting in Brussels did not mention Azerbaijan's proposals for peace talks and Armenia's proposals in response. And the President of Azerbaijan stated that the 5 principles proposed by Azerbaijan will play a key role in the preparation of the peace treaty.

"Some formulations that have given rise to speculation are, in fact, that the principles proposed by Armenia and Azerbaijan should become the common pillars of the peace treaty. It may be formulated not correctly, not successfully, but in reality it is about that," Pashinyan assured.

There is a very important conceptual debate in the international community, Pashinyan noted that that debate has reached the Republic of Armenia. "There is a question whether the issue of normalization of relations should also resolve the Nagorno-Karabakh conflict, or whether the Nagorno-Karabakh conflict should be separated from the issue of normalization of relations and viewed as a separate issue. This question arose from our response. Azerbaijan says "no territorial claims to each other", we say that it is acceptable, because for us the Karabakh issue has never been a matter of territory, it is a matter of right. And the statement of the President of the European Council refers to the right probably for emphasizing that context," Pashinyan said.

Pashinyan noted that the representatives of the opposition are also developing that agenda, saying that the agenda of normalization of relations should be separated from the agenda of the settlement of the Nagorno-Karabakh conflict. The Prime Minister considered this a legitimate point of view. He highlighted the discussions during this period, emphasizing that a number of opposition partners refuse from those discussions. "But we have those discussions with other political circles, moreover, we also discuss with the Artsakh authorities which tactical approach is better," Pashinyan said, adding that he has his own position, but that position will be specified after discussions with a wider audience.

He stressed that Artsakh's position on this issue will be very important.

"In fact, now the negotiations are about the format and parameters of starting negotiations. What we are discussing is about that," said the Prime Minister.

The Prime Minister cannot say when the talks will start. The foreign ministries of the two countries work together.