Technologies are an opportunity for economic breakthrough, this sphere is of strategic importance for Armenia. PM | ARMENPRESS Armenian News Agency

Technologies are an opportunity for economic breakthrough, this sphere is of strategic importance for Armenia. PM 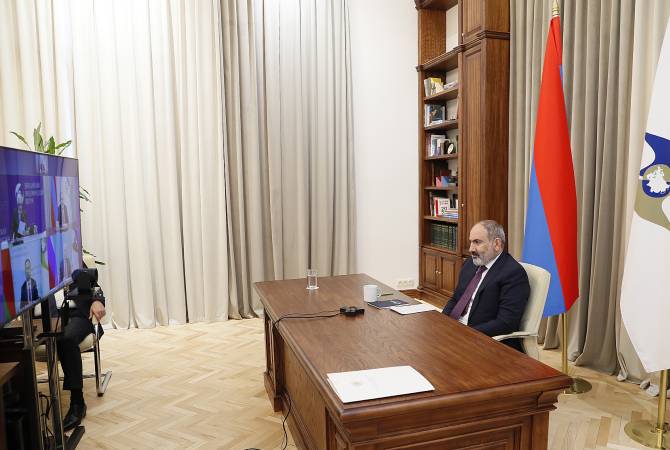 
YEREVAN, MAY 26, ARMENPRESS. Prime Minister of Armenia Nikol Pashinyan participated in the Eurasian Economic Forum in Bishkek via video conference, ARMENPRESS was informed from the Office of the Prime Minister.

In his speech, Prime Minister Pashinyan greeted the leaders of the countries participating in the forum, heads of delegations, and all those present, expressing hope that the successful holding of the event and the agreements to be reached within its framework will contribute to the further progress of Eurasian integration.

"As for the service sector, the services are really becoming a generator of new points for the development of economic cooperation between the countries of our Union. The role of this sector in the economy is constantly growing and certain types of services, as factors for production, have a significant impact on the competitiveness of goods, industries and economies. In this respect, the most important task of Eurasian integration is to ensure the free movement of services. This issue is being solved, including through the liberalization of the sector, the formation of a common market for services, which in turn expands the opportunities for business activation. We can say that the level of free movement of services is a unique indicator of integration.

The development of the trade of services is conditioned, among other things, by the development of scientific and technical progress in the field of cross-border trade, technological changes, which in itself is a tool for overcoming "geographical segregation" and is relevant for Armenia.

In this regard, special attention should be paid to the development of telecommunications and information technologies, guaranteeing their equal availability.

In this context, a key area of cooperation is the consolidation of the efforts of the IT communities of the Member States to actively develop the high-tech sectors of the economy and to fully implement the Union's digital agenda. Within the framework of the implementation of the digital agenda, it is necessary to consistently promote the initiatives aimed at deepening the integration processes and receiving direct benefits for the economies and citizens of the EEU member states.

As it is known, technological innovation is also beneficial for the provision of services. The age of information and digital technologies increases the international competitiveness of countries. And this is especially true for small countries like Armenia, which have limited influence on world processes due to geographical and geopolitical constraints. Information technologies provide a level playing field for all players, regardless of their position or capabilities. This is the reason why the Armenian Government considers the IT sector one of the bases for economic development.

We aim to expand our capabilities to become a country that produces, delivers high-quality, intelligence-based products and services at the heart of which will be the creative human capital.

In general, new technologies are an opportunity for economic breakthrough, a challenge for those who want to keep up with the progress of humanity. This sphere is of strategic importance for Armenia, as it is one of the unique branches, which does not require ports, access to the sea, rich mineral resources for development. It requires human capital, and that is the resource with which Armenia has always stood out. From this point of view, we also pay great attention to the development of young people's skills through the teaching of digital technologies."

In response to the question of moderator of the forum Alexander Shokhin, Prime Minister Pashinyan noted that the Government of our country is making all efforts to make Armenia attractive especially for investments in the sphere of information technologies, and investments in all spheres in general. "We now see that there is a certain flow of IT specialists to Armenia, we understand the context, we try to create conditions for these movements within the EEU to serve the further development of the Union's integration processes, since it is a common market, common area. In general, we can say that we show that we have achieved one of the main goals of the EEU, because we are now practically implementing the principles of free movement of labor, goods and services. I hope that this will become a usual thing in the Eurasian Economic Area, which is, in fact, the goal that was set in front of the organization at the time of its creation. So this is a very important nuance to emphasize the effectiveness of the Eurasian Economic Union."