By signing the document on November 9, Azerbaijani president acknowledged the existence of Nagorno Karabakh. FM Mirzoyan 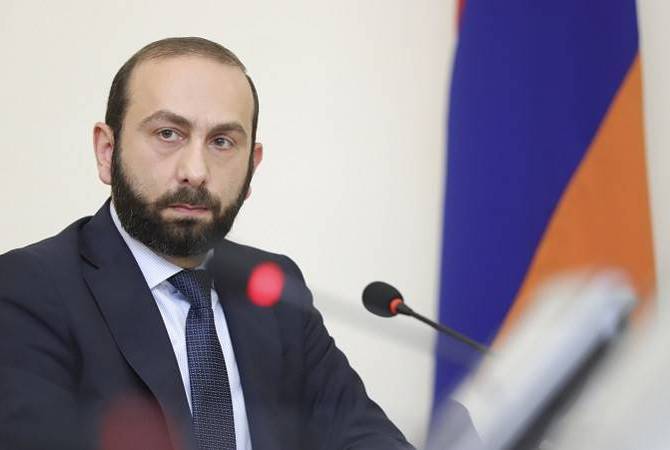 
YEREVAN, MAY 28 ARMENPRESS. Armenian Foreign Minister Ararat Mirzoyan referred to the statement of Azerbaijani president Ilham Aliyev that there is no Nagorno Karabakh, the Nagorno-Karabakh conflict is resolved, there is no OSCE Minsk Group.

Answering the question of ARMENPRESS, the Armenian FM emphasized that they can show a document signed by Azerbaijani president that is still in force, which says that there is Nagorno Karabakh, and that is the trilateral declaration signed on November 9, 2020. Ararat Mirzoyan emphasizes that by signing the document, the president of Azerbaijan acknowledged the existence of Nagorno Karabakh, and this is an irreversible fact.

The Armenian Foreign Minister also referred to Aliyev's statement that an agreement had been reached in Brussels that a corridor linking Azerbaijan with Nakhichevan will pass through Meghri.

Question - Azerbaijani President Ilham Aliyev stated on May 27 that there is no Nagorno Karabakh, the Nagorno-Karabakh conflict is resolved, and there is no OSCE Minsk Group. What can you say about this?

Answer – We can show a document signed by Azerbaijani president that is still in force, which says that there is Nagorno Karabakh, and that is the trilateral declaration signed on November 9, 2020. Ararat Mirzoyan emphasizes that by signing the document, the president of Azerbaijan acknowledged the existence of Nagorno Karabakh, and this is an irreversible fact. We can show the official statements made by the OSCE Minsk Group Co-Chair countries, where they reaffirm their commitment as Co-Chairs. The United States and France made such statements only in the last week. The Prime Minister of Armenia and President of the Russian Federation also emphasized the role of the OSCE Minsk Group Co-chairs in their joint statement on April 19. At the December 2021 summit of the OSCE Ministerial Council in Stockholm, the foreign ministers of dozens of countries stressed the exclusive role of the OSCE Minsk Group Co-chairs in the settlement of the Nagorno-Karabakh conflict. The OSCE Minsk Group was not created by Azerbaijan, but by the international community, so Azerbaijan cannot dissolve it or consider its mission over. The same international community states today that the OSCE MG exists. As I mentioned, it also states that there is a Nagorno-Karabakh conflict that needs to be resolved. This is stated in the above-mentioned statement of the Prime Minister of Armenia and the President of the Russian Federation. The US Ambassador Extraordinary and Plenipotentiary to the Republic of Armenia stated this quite recently, expressing the official position of the USA.

Moreover, in the same statement, it was emphasized that the issue of NK status is on the agenda, the right of Armenians of Nagorno Karabakh to self-determination is also on the agenda. By the way, Armenia has never had territorial claims from Azerbaijan. The Nagorno-Karabakh conflict is a matter of right and is perceived by the international community as so. And that is evidenced from the meeting in Brussels. We have stated that the page of the war is closed for us, there is a problem that must be solved through political and diplomatic means.

Question - Ilham Aliyev also stated that an agreement had been reached in Brussels about a corridor connecting Nakhichevan to Azerbaijan through Meghri.

Answer - We have continuously recorded Armenia's position. But let us repeat again. The existence of any corridor in the territory of Armenia is ruled out. This is not even a matter of debate. Our discussions are exclusively about opening roads, transport and economic communications, unblocking them. As for the routes, we said that before clarifying the routes, we must first agree on the legal regulations for the passage of Azerbaijani citizens and cargo through our territory and the passage of Armenian citizens and cargo through Azerbaijan (including Nakhichevan). However, it is obvious that one branch of the railway will pass through Meghri, Ordubad, Julfa, Yeraskh. There is no agreement on the route of the highways at the moment.