Bilateral relations, security and regional issues. Meeting of Presidents of Armenia and Georgia 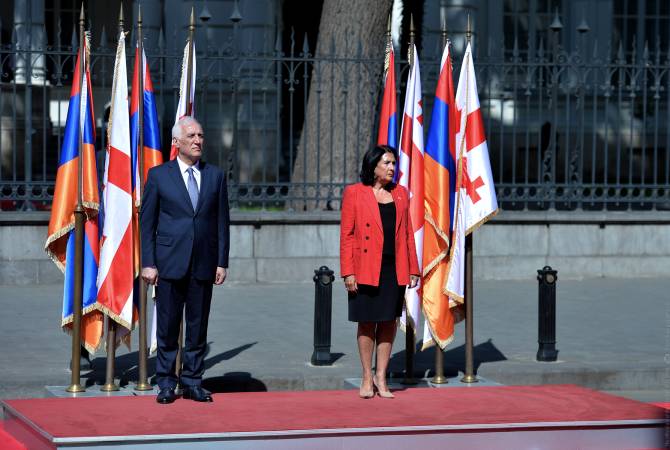 As ARMENPRESS was informed from the press service of the Armenian President’s Office, the military orchestra performed the anthems of Armenia and Georgia.

After the official welcoming ceremony, the President of Armenia made a note in the book of honorary guests of the Presidential Palace of Georgia. "I am glad to state that I am paying my first official visit in the status of the President to fraternal Georgia. I am convinced that as presidents of good-neighborly states, we will make a significant contribution to the further strengthening and deepening of relations between the two countries," the Armenian President wrote.

Afterwards, the private conversation between the Presidents of Armenia and Georgia Vahagn Khachaturyan and Salome Zourabichvili took place, which was followed by a meeting of the delegations in an expanded format.

Welcoming the official delegation of Armenia, Georgian President Salome Zourabichvili said that it is very appreciated that the visit takes place on the 30th anniversary of the establishment of diplomatic relations between Armenia and Georgia, which have been 30 years of close friendly relations between the two countries and will continue in the same way.

President Khachaturyan thanked for the warm reception and noted that Armenia attaches great importance to the continuous development and strengthening of relations with neighboring Georgia, for which there are all preconditions.

Issues related to Armenian-Georgian relations and development prospects were discussed at the meeting. The sides stressed that there is a great potential for expanding cooperation in various fields, including the fields of transport, communications and information technologies.

Security and political issues, as well as other issues of regional significance were touched upon, and it was noted that the high level of relations between Armenia and Georgia is one of the important factors ensuring security in the South Caucasus.