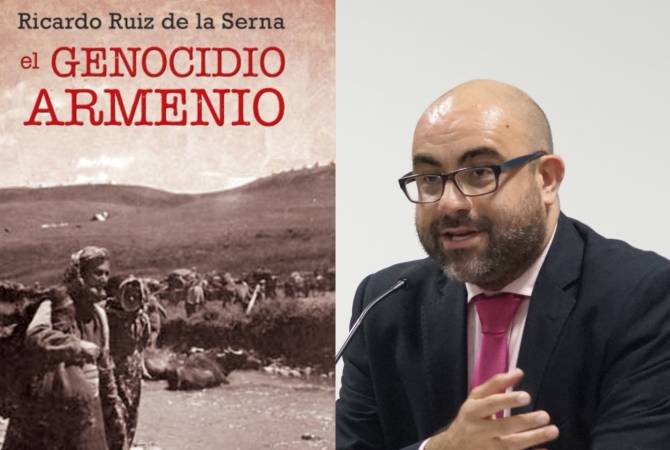 
YEREVAN, JUNE 21, ARMENPRESS. A documentary book on Armenian Genocide has been published in Spain for the first time. Author of the book “Armenian Genocide” (El Genocidio Armenio), Ricardo Ruiz de la Serna, Associate Lecturer of Current World History at the international degrees of San Pablo CEU-University Madrid, has been studying the 1915 Armenian Genocide for years and advocating the Spanish recognition of the Genocide.

In an interview to ARMENPRESS, Ricardo Ruiz de la Serna said he wrote the book for justice aimed at raising awareness on the Armenian Genocide within the Spanish society.

“This book is just a modest contribution to set the facts and pave the way for a better understanding of the Armenian Genocide among the Spanish general public”, he says.

Ricardo Ruiz de la Serna has no Armenian roots. He says he has been interested in Armenian culture since childhood thanks to his father who loved Armenian music. “After I visited the Armenian Genocide Museum-Institute in 2012, I decided to focus on the Armenian Genocide and have been reading and researching since then. After 10 years, it was high time to write something targeting the Spanish audience. I wrote something about my personal progress some years ago”, he says.

The author says that the book is a short history of the Genocide. It is covering the road to the Genocide – the Hamidian Massacres, the destruction of the Armenians in Cilicia, the ideological and political roots of political violence against Armenians in the Ottoman Empire, how it was perpetrated (legal framework, military and paramilitary units, etc) and the different stages of the genocide (massive arrests, deportations, confiscations, death marches through the dessert, etc).

“However, I am also interested in the Armenian attempts to resist and fight. Sometimes people think that Armenians remained “silent like a lamb being led to the butcher” and accepted their terrible fate. It was not so. Wherever they could fight and resist, they did it. Probably the most famous example was the Armenian resistance in the Musa Dagh in July 1915”, he added.

In his book Ricardo Ruiz de la Serna has also touched upon the material destruction and confiscation of Armenian-owned estate (houses, churches, businesses) and the unjust laws that made it possible.

He says he summed up some other issues like the evidence of the genocide including some Spanish sources, scholarship and authors. “The epilogue deals with the issue of impunity of the Genocide”, he adds.

“The Armenian people suffered a genocide before the eyes of the world (we shouldn´t forget the journalists and diplomats reporting from many places like Constantinople, Aleppo, etc).
Later it was denied and went basically unpunished. This impunity is one of the great injustices in the XX century”, he says.

He thinks there are valuable lessons to learn from the current time: the importance of international commitment, the need to resist and fight wherever possible, the importance of memory, the need of justice… “We need to talk about the non-Armenians who tried to help and, in some cases, save Armenians. They shouldn´t be forgotten. They should rather become examples of what is right and decent beyond cultural, ethnical or religious differences”, he adds.

Ricardo Ruiz de la Serna says many people welcomed such a book for the Spanish audience. He hopes it will also help to raise the level of Armenian studies in Spain and foster cooperation with scholars and researchers from other countries

“I have been advocating for a very long time for the Spanish recognition of the Armenian Genocide. This is a general knowledge book geered toward the general public. I would like my fellow citizens to hear and read, including some Spanish sources, the history of the genocide, yes, but also the stories of heroism, resistance and humanity by Armenians. Definitely I’d like to raise awareness of the need of recognition, but also of the suffering and dignity of the Armenians confronting this terrible fate”, he says.

Asked what perspectives he sees for the recognition of Armenian Genocide by Spain on a state level, Ricardo Ruiz de la Serna said he is optimistic over the recognition. “I am mostly confident and optimistic regarding the recognition. Perhaps it will take some time but Armenians know the value of patience, perseverance and hope. I remember the story of how Armenian books were tore apart in order to be saved during the Genocide. They were not saved for the present generation but for generations to come. That action was not out of desperation but out of faith and hope in the future. I would like to honor that confidence in the future, although I would prefer my book not to be tore apart unless necessary to save it”, he stated.