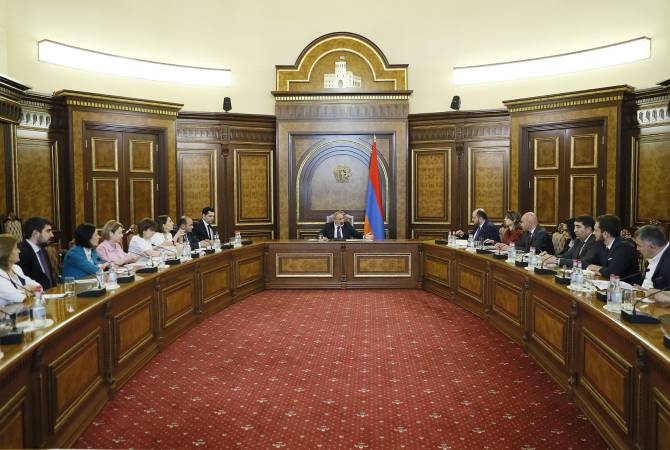 
YEREVAN, JUNE 24, ARMENPRESS. Today, Prime Minister Nikol Pashinyan received members of the Coalition for Inclusive Legal Reforms. Representatives of interested state agencies and institutions took part in the meeting, ARMENPRESS was informed from the Office of the Prime Minister.

Prime Minister Pashinyan welcomed and encouraged such meetings, which are an effective platform for discussing issues related to the inclusion process and ways to resolve them.

Coordinator of the Coalition for Inclusive Legal Reforms Mushegh Hovsepyan welcomed the Government's policy of keeping the inclusion process in the center of attention and supporting the protection of the rights of persons with disabilities through legislative initiatives. Referring to the activities of the coalition, he noted that founded in 2017, it is a union of 14 organizations operating in Armenia and provides legal assistance to persons with disabilities.

Content-related, legislative and technical issues related to inclusion were discussed at the meeting. The members of the coalition presented to Nikol Pashinyan a number of issues related to the establishment of independent resource centers for people with disabilities, access to education, access to infrastructure through subsidy programs, increase of day care services, mental health strategy, development of assistive technologies, etc. They expressed satisfaction with the availability of public transport in Yerevan, noting that there is need to increase the availability of public transport in the regions.

Touching upon the observations, the Prime Minister noted that the Government is consistent in supporting the inclusion process, for this purpose 4 billion AMD have been allocated from the state budget this year. Minister of Labor and Social Affairs Narek Mkrtchyan presented the state programs and the steps taken in the context of the issues raised.

During the exchange of views, the current reforms and joint actions to promote inclusion were discussed.

The Prime Minister noted that since 2018, there has been no program that was not implemented due to lack of funds, so it is necessary to focus on the implementation of substantive programs, focusing on education and employment components. The Prime Minister proposed to inventory the existing needs in cooperation with the Ministry of Social Affairs and Labor and the National Assembly to develop the state support strategy according to those needs.

Based on the results of the discussion, Nikol Pashinyan gave instructions to those responsible, as well as suggested to the NGO representatives to come up with proposals for solving the problems.