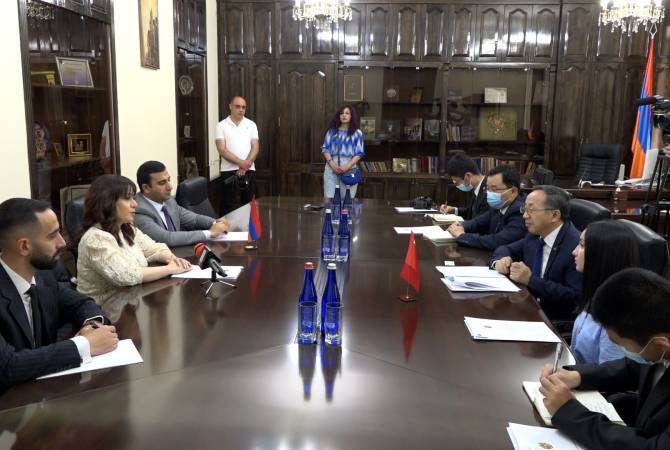 
YEREVAN, JUNE 24, ARMENPRESS. Ambassador Extraordinary and Plenipotentiary of the People's Republic of China Fan Yong paid an official visit to the Shirak Province on June 24 and met with Governor Nazeli Baghdasaryan.

The Ambassador shared his first impressions of the Shirak Province with journalists, noting that he liked Gyumri very much, the local climate is cooler than in Yerevan.

"I think that when Chinese tourists come to the Shirak Province, they will have the same impressions as I do," said Fan Yong.

In a conversation with ARMENPRESS, the Ambassador attached importance to the cooperation between the two countries in various spheres, particularly in the spheres of education, trade, tourism, agriculture.

"The most important thing is to be able to export the products of the Shirak Province to China, so that the Chinese people can better recognize the Armenian products and Armenia," said the Ambassador, attaching importance to the cooperation between Gyumri and  Chinese cities.

During the meeting with the Governor of Shirak Nazeli Baghdasaryan, the prospects of future cooperation were touched upon.

"The delegation of Shirak Province signed a memorandum of cooperation and mutual understanding in China's Hainan province in 2019, which is already a practical step in terms of establishing close relations between the two regions. Today we have the opportunity to further develop those relations," said the Governor.

During the meeting, reference was made to the opening of the Chinese Confucius classroom in the Shirak Province, issues related to the teaching of the Chinese language. The Governor assured that she will be one of the first in terms of learning Chinese.

Ambassador Fan Yong thanked Nazeli Baghdasaryan for the warm reception, noting that the past 30 years of Armenian-Chinese diplomatic relations have been quite productive.

Within the framework of his first official visit to Shirak Province, Fan Yong also visited Gyumri Municipality, where he was received by Deputy Mayor David Arushanyan. The Ambassador then visited the Gyumri regional library, where in 2018, thanks to the efforts of the Ministry of Culture, the Chinese Embassy in Armenia, a mobile library was launched and "Smile" preschool, the building of which was renovated in 2019 with the help of the Chinese Embassy.