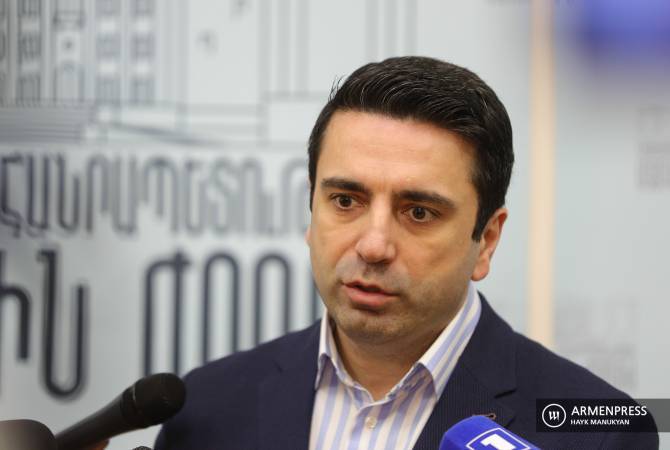 
YEREVAN, JUNE 28, ARMENPRESS. The ruling Civil Contract faction of the Parliament of Armenia will discuss the issue of stripping opposition MPs of their mandates over nonattendance in coming days, Speaker of Parliament Alen Simonyan told reporters at a briefing today.

“We will discuss this issue in the faction, as well as with the Board in coming days, whether it is worth or not, because the law allows it. There are two opinions: according to one opinion, the opposition has largely deprived itself of its mandates. Frankly, I can’t imagine how our colleagues will return back to his hall after setting such a high bar and then staying “under” that bar. The other opinion is that everything what they did should be “worn out””, the Speaker said.

The Speaker said that currently there are 10 MPs, whose absences are more than allowed, which enables to strip them of mandates. He didn’t rule out that oppositions may also be stripped of the positions of the Vice Speaker and the Chairmen of Standing Committees.

“Opposition is engaged in fight for power and is already doing this openly. Leaving everything aside, they are now interpreting and explaining why they should not be stripped of their mandates. This has been a fight for power from the very first day, this is a fight for power for the supporters of both the ARF and Robert Kocharyan, this is a matter of having a mandate in order to have immunity to go and hit the policeman and say that they are a Member of Parliament”, he said.

Commenting on comparisons with the parliamentarian disobedience in 2018, the Speaker said that neither Nikol Pashinyan nor any opposition lawmaker had filled the number of absences that which was required for stripping of mandates. He didn’t consider these comparisons appropriate.